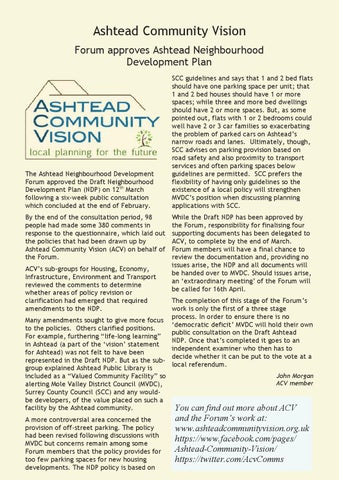 The Ashtead Neighbourhood Development Forum approved the Draft Neighbourhood Development Plan (NDP) on 12th March following a six-week public consultation which concluded at the end of February. By the end of the consultation period, 98 people had made some 380 comments in response to the questionnaire, which laid out the policies that had been drawn up by Ashtead Community Vision (ACV) on behalf of the Forum. ACV’s sub-groups for Housing, Economy, Infrastructure, Environment and Transport reviewed the comments to determine whether areas of policy revision or clarification had emerged that required amendments to the NDP.

SCC guidelines and says that 1 and 2 bed flats should have one parking space per unit; that 1 and 2 bed houses should have 1 or more spaces; while three and more bed dwellings should have 2 or more spaces. But, as some pointed out, flats with 1 or 2 bedrooms could well have 2 or 3 car families so exacerbating the problem of parked cars on Ashtead’s narrow roads and lanes. Ultimately, though, SCC advises on parking provision based on road safety and also proximity to transport services and often parking spaces below guidelines are permitted. SCC prefers the flexibility of having only guidelines so the existence of a local policy will strengthen MVDC’s position when discussing planning applications with SCC. While the Draft NDP has been approved by the Forum, responsibility for finalising four supporting documents has been delegated to ACV, to complete by the end of March. Forum members will have a final chance to review the documentation and, providing no issues arise, the NDP and all documents will be handed over to MVDC. Should issues arise, an ‘extraordinary meeting’ of the Forum will be called for 16th April.

The completion of this stage of the Forum’s work is only the first of a three stage process. In order to ensure there is no Many amendments sought to give more focus ‘democratic deficit’ MVDC will hold their own to the policies. Others clarified positions. public consultation on the Draft Ashtead For example, furthering “life-long learning” NDP. Once that’s completed it goes to an in Ashtead (a part of the ‘vision’ statement independent examiner who then has to for Ashtead) was not felt to have been decide whether it can be put to the vote at a represented in the Draft NDP. But as the sublocal referendum. group explained Ashtead Public Library is John Morgan included as a “Valued Community Facility” so ACV member alerting Mole Valley District Council (MVDC), Surrey County Council (SCC) and any wouldbe developers, of the value placed on such a facility by the Ashtead community. You can find out more about ACV A more controversial area concerned the provision of off-street parking. The policy had been revised following discussions with MVDC but concerns remain among some Forum members that the policy provides for too few parking spaces for new housing developments. The NDP policy is based on