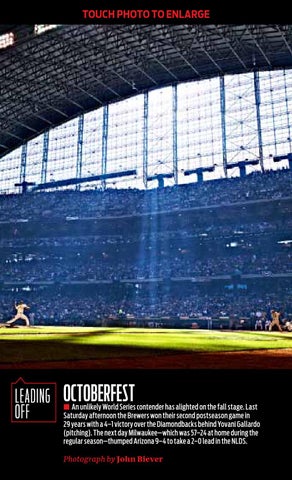 ■ An unlikely World Series contender has alighted on the fall stage. Last Saturday afternoon the Brewers won their second postseason game in 29 years with a 4–1 victory over the Diamondbacks behind Yovani Gallardo (pitching). The next day Milwaukee—which was 57–24 at home during the regular season—thumped Arizona 9–4 to take a 2–0 lead in the NLDS. Photograph by John Biever

agony of the feet

■ The Steelers’ Ben Roethlisberger delivered another painful performance (16 of 30, no TDs, five sacks) in a 17–10 loss to the Texans on Sunday in Houston. Though J.J. Watt was called for roughing the passer on this fourthquarter play—which also nullified a Houston interception return for a TD—the Pittsburgh QB got the worst of the encounter, suffering a sprained left foot that put him in a walking boot and left his status for this weekend unclear. Photograph by Simon Bruty

close up and personal

■ The mugs of Sidney Crosby and Alex Ovechkin are well known, but there are more than two faces in the NHL—and more than two stars. In early September, as part of the league’s preseason media tour, a bounty of hockey’s brightest lights dropped by SI’s Manhattan offices. Among the players pictured at right are four No. 1 draft picks, six Stanley Cup winners, two playoff MVP’s, 10 All-Stars and three Olympic gold medalists. Photograph by Simon Bruty

Bloody right you are

â&amp;#x2013; Seanie Monaghan draws a trickle of red from Kentrell Claiborne during the third round of their light heavyweight fight in Atlantic City last Saturday. Monaghan, who is undefeated with six knockouts in nine bouts, won by a TKO one round later. Photograph by Tim Larsen/AP

■ St. Louis outfielder Jon Jay levels Phillies catcher Carlos Ruiz on a play at the plate in the fourth inning of the Philadelphia–St. Louis National League Division Series game on Sunday night at Citizens Bank Park. Ruiz held on to the ball to preserve the Phillies’ 4–3 lead, but starter Cliff Lee couldn’t hold on to the lead in a 5–4 Cardinals victory that tied the series at 1–1. Photograph by Al Tielemans

■ Jannie du Plessis, Bismarck du Plessis and Tendai Mtawarira get their scrum on during a practice session of the South African national rugby team on Sept. 27 in Taupo, New Zealand. South Africa qualified for the quarter finals of the Rugby World Cup three days later when it defeated Samoa. Photograph by Duif du Toit/Gallo Images/Getty Images

■ Marshawn Lynch takes a tumble late in the third quarter of the Seahawks-Falcons game on Sunday but lands in the end zone to bring Seattle within six points of Atlanta. The Falcons, however, would hang on for the 30–28 victory. Photograph by Mike Powell

■ Nearly 10 centuries after his death, El Cid remains an icon in Burgos, Spain, where he spent his early life before he was exiled by Spanish Emperor Alfonso VI. Actors dressed as El Cid jousted from their steeds during a weekend festival in Burgos commemorating the Castilian nobleman and military leader. Photograph by Félix Ordoñez/Reuters