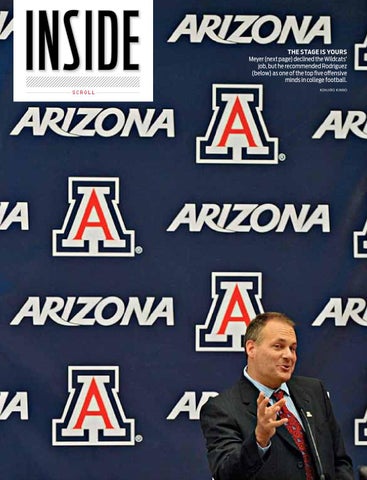 the stage is yours Meyer (next page) declined the Wildcats’ job, but he recommended Rodriguez (below) as one of the top five offensive minds in college football. ko h jir o kin n o

The rebuilding job for a new coach begins immediately. For Rich Rodriguez’s first two days, SI was there for every minute b y a n d y s t a p l e s

he coaching carousel began spinning wildly this week with the firing of, among others, (ex–Florida coach) Ron Zook at Illinois and the hiring of (ex–Florida coach) Urban Meyer at Ohio State. Before he accepted the job in Columbus on Monday, Meyer (inset) was contacted about the opening at Arizona, and he eventually played a role in the selection of Rich Rodriguez as the new Wildcats coach (more on that later). Here’s an exclusive, behind-the-curtain look at the all-important transition that any new coach makes with his team.

Nov. 21 6 p.m. Eastern Standard Time As his plane touched down in Detroit, Arizona athletic director Greg Byrne wondered how to tell the world about

the man he planned to hire as the Wildcats’ new football coach. The 39-year-old son of Texas A&amp;M A.D. Bill Byrne wanted to reveal on Twitter the identity of the coach he hopes will lead Arizona to the Rose Bowl, but how, he wondered, to make the reveal memorable? His wife, Regina, suggested he keep fans in suspense for precisely the amount of time necessary for a linked photo to load onto their Web browsers and smartphones. A few minutes later, a hyperlink appeared after the following message on Byrne’s Twitter account: “And the new Arizona football coach and his family is . . .” The thousands who clicked the link saw former West Virginia and Michigan coach Rich Rodriguez, grinning as ----------------

if he’d just won the lottery. In a way, he had. Rodriguez had begun his three seasons with the Wolverines fighting a lawsuit by West Virginia officials for the full amount of his buyout. (The case was settled out of court in July 2008.) His tenure in Ann Arbor was defined by a 15–22 record and NCAA probation. Flying with Byrne to a city he had never seen, Rodriguez could finally put Michigan in the past.

crazing arizona After being greeted by the school’s pep band (left), Rodriguez began the business of winning over his players.

Byrnes and their two teenage boys, Rod­riguez sat on a stool in the kitchen of the Byrnes’ home and workshopped material for the next day’s press conference. He told the story of his first game at Glenville State, in 1990. The 25 players he inherited were so pitiful that he resolved to declare the season a success if his team made one first down. He would repeat the story almost word for word at the next day’s press ­conference.

Nov. 22 8 a.m. Rodriguez sat in the office of Arizona compliance director Bill Morgan taking a practice version of the

11:30 p.m. Mountain Standard Time Byrne was impressed with Rod­riguez despite his lack of success with the Wolverines. In October, when Byrne decided to fire coach Mike Stoops, he placed Rodriguez, who was working as a studio analyst for CBS

Sports, on a short list of candidates. In his search Byrne contacted Rod­riguez, former Oregon coach Mike Bellotti and ex–Florida coach Urban Meyer. Though he ­wasn’t interested in the position, Meyer told Byrne that Rodriguez was one of the five top offensive minds in college football. Byrne met with Rodriguez in Michigan in early November, and he even visited NCAA headquarters in Indianapolis to make sure he had a complete understanding of the compliance issues that had landed Rodriguez and the Wolverines in the organization’s crosshairs. On Nov. 21 the two men agreed on a fiveyear, $9.55 million deal. As Rodriguez, wife Rita, daughter Raquel, 15, and son Rhett, 13, got to know the

interview with michigan state qb kirk cousins Regents approves his hiring. Rodriguez and Byrne negotiated the MOU themselves. “I don’t need a high-priced attorney for that,” Rodriguez said. “I’ve had enough lawyers the last three years to open my own firm.” After Byrne and Rodriguez signed the MOU, the room cleared for the actual recruiting test, which Rodriguez took on a secure NCAA website. Minutes later he emerged smiling. He had aced the test. 10:30 a.m. Grim faces around a conference table stared back at Rodriguez as he introduced himself to the football support staff. Employees of any major program know that their futures hang in the balance whenever there is a coaching change. The new coach did not mince words. “There are people that I’ve been comfortable with that will be joining the staff,” he announced. “But there are other cases where I’d rather have someone who has been here.” After the meeting a young

12/6/2009 Hours after losing to Alabama in the SEC championship game, Meyer is rushed to the hospital complaining of chest pains.

12/26/2009 Meyer announces his resignation, citing concerns over his health. One day later, he reneges but says he’s taking a leave of absence.

Meyer officially resigns as the Gators’ coach, saying he

NCAA recruiting-rules test he needed to pass before he would be allowed to recruit off-­campus. Rodriguez ran afoul of the NCAA at Michigan after the Detroit Free Press reported in August 2009 that the Wolverines had practiced longer than the NCAA allows and that quality-control ­s taffers— who are not allowed to coach players but who served as part-time strength coaches on Rodriguez’s staf f—had overstepped their boundaries. Rod­riguez said the strength staff did not realize that time spent stretching and in warmups counted if staffers were present during the warmup. In November 2010 the NCAA placed the Wolverines on three years’ probation and docked them 130 hours of practice time. Although Rodriguez was cleared of the most serious charge, failure to promote an atmosphere of compliance, the investigation left a stain. Byrne popped into the office with the Memorandum of Understanding that will serve as Rodriguez’s contract until the school’s Board of

strength coach approached Rod­riguez and asked about Mike Barwis, Rodriguez’s strength coach at West Virginia and at Michigan. Barwis is a logical choice to join Rodriguez in Tucson. “He’s indicated that he’s probably going to do that,” Rodriguez told the young coach. read the signs The new coach understood the importance of sending out a clear message to his new players.

Arizona State. Most important, Rodriguez had to use the Wildcats’ motto, “Bear Down,” taken from the dying words of football and baseball player John Salmon, who died in 1926 after a car crash. It’s Arizona’s version of Michigan’s “Go Blue.” Rita, Raquel and Rhett arrived for their introductions. Rita had bought a navy-blue outfit for the occasion. In 2006 she bought a crimson outfit for her husband’s press conference as the new coach at Alabama. But after he decided to stay at West Virginia, she resolved never to shop for a press conference again until the ink was dry on a deal. 1:30 p.m. Rodriguez had al-

2 a.m. In the equipment room during a tour of the A r i z ona fac i l it ies, Ro driguez asked how often managers checked the inflation level of interior helmet padding. In the weight room he asked about the ab dom i n a l e qu ipme nt . By Pac-12 standards, the Wildcats’ facilities are average, but they lag far behind those at elite SEC and Big 12 schools. With rivals Cal, USC and Oregon all upgrading their facilities, Arizona will try to keep pace by building a new football headquarters to house the coaches’ offices, locker rooms and weight room, at an estimated cost

11 a.m. In the conference room next to Byrne’s office, the senior athletic department staff prepped Rodriguez for his press conference. He had flopped the first time he met the media at Michigan when, in response to a question about whether the coach needed to be a “Michigan Man,” he replied, “Gosh, I hope not. They hired me.” Deputy A.D. Kathleen (Rocky) LaRose was an Arizona softball player and the school’s 1978 homecoming queen. She advised Rodriguez to mention winning the Pac-12 South and the Pac-12 title. He needed to mention the Rose Bowl, which has remained unreachable for the Wildcats since they joined the conference in 1978. He needed to mention the Territorial Cup rivalry against

ready met with interim coach Tim Kish, the defensive coordinator under Stoops, and recruiting coordinator Dave Emerick. Now he needed to meet the Wildcats. Rodriguez introduced the team to his family, then debunked the notion that players he recruits will get preferential ­treatment—an attempt to alleviate the most common fear players have during a coaching change—saying, “You are my guys, starting today.”

of $72.3 million. The new building, which Byrne used to help lure Rodriguez, is scheduled to open in 2013. Byrne says groundbreaking will take place in the next few months. During his tour, Rodriguez frequently stopped to introduce himself to players. He gave junior safety

Adam Hall his Michigan a nd A r i z ona cel lphone numbers and told Hall to call anytime. To make the transition from Stoops a smoot h one, Rodr ig uez needs a respected player such as Hall on his side. 4:30 p.m. While Rodriguez watched the Wild-

cats prepare to take on ­ ouisiana-Lafayette, Regina L Byrne led Rita on a househunting expedition. Rita loved the floor-to-­ceiling windows of a 6,000-square-foot house with a view of Finger Rock, but the layout didn’t work. The house did not have a space large enough to host recruits and their parents

up, down, all around Before his disastrous turn at Michigan, Rich Rodriguez achieved success wherever he coached, particularly at West Virginia from 2001 to ’07. But a closer look reveals two sides to his record.

The Wolverines go 3–9 in Rodriguez’s first season on the sideline, the worst record in school history.

Tulane coach Tommy Bowden hires Rodriguez as his offensive coordinator, and the Green Wave goes 12–0 in 1998.

Rodriguez takes over as coach at Salem (W.Va.) College at age 24, becoming the youngest head coach in the country.

man in the middle Rodriguez’s whirlwind first day included touring the facilities, watching the team practice and participating in a photo shoot.

on an ­official-visit weekend. Rita understands the recruiting game. “To get a Denard Robinson, you have to impress him,” Rita says, referring to the star quarterback her husband signed at Michigan. “You want them to think you think big.”

Nov. 23 Noon Central Standard Time More than 30,000 feet over Florida’s panhandle, Rodriguez leaned back in his seat on a private jet and smiled. The son of a West Virginia coal miner, his first time on a plane had come when he was a freshman walk-on with the Mountaineers. “Now look,” he

said. “My kids are on a private jet twice in three days.” Unt il Michigan, Rod­ riguez had succeeded everywhere he’d coached. He burns to prove that his last job was an anomaly. 2 p.m. EST The plane landed in Fort Myers, Fla., so Rod­r iguez and his family could spend Thanksgiving in nearby Naples. An SUV picked them up on the runway and headed toward long-term parking. Inside sat a coach hoping he had secured his long-term future. His vacation would be short. On Black Friday, Rodriguez boarded a 6 a.m. flight back to ­Tucson. ±

8:30 p.m. While his chicken sat untouched at the head of a long table in a private room at a local steak house, Rodriguez stood in a corner talking on his cellphone to a prospective as-

sistant coach. He had taken several such breaks, either to speak to recruits or to potential ­a ssistants. Rodriguez plans to hire several coaches quickly. After leaving the restaurant, he ended his first day by staying up until midnight chatting with recruits and ­coaches.