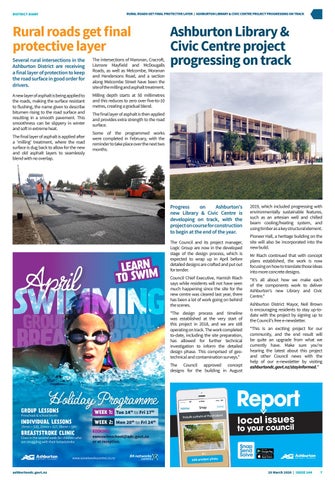 Rural roads get final protective layer ​ everal rural intersections in the S Ashburton District are receiving a final layer of protection to keep the road surface in good order for drivers.

The intersections of Maronan, Cracroft, Lismore Mayfield and McDougalls Roads, as well as Melcombe, Moranan and Hendersons Road, and a section along Melcombe Street have been the site of the milling and asphalt treatment.

A new layer of asphalt is being applied to the roads, making the surface resistant to flushing, the name given to describe bitumen rising to the road surface and resulting in a smooth pavement. This smoothness can be slippery in winter and soft in extreme heat​.

Milling depth starts at 50 millimetres and this reduces to zero over five-to-10 metres, creating a gradual blend.

The final layer of asphalt is applied after a 'milling' treatment, where the road surface is dug back to allow for the new and old asphalt layers to seamlessly blend with no overlap.

The final layer of asphalt is then applied and provides extra strength to the road surface. Some of the programmed works were completed in February, with the reminder to take place over the next two months.​

Progress on Ashburton's new Library & Civic Centre is developing on track, with the project on course for construction to begin at the end of the year. The Council and its project manager, Logic Group are now in the developed stage of the design process, which is expected to wrap up in April before detailed designs are crafted and put out for tender. Council Chief Executive, Hamish Riach says while residents will not have seen much happening since the site for the new centre was cleared last year, there has been a lot of work going on behind the scenes. "The design process and timeline was established at the very start of this project in 2018, and we are still operating on track. The work completed to-date, including the site preparation, has allowed for further technical investigation to inform the detailed design phase. This comprised of geotechnical and contamination surveys." The Council approved concept designs for the building in August

2019, which included progressing with environmentally sustainable features, such as an artesian well and chilled beam cooling/heating system, and using timber as a key structural element. Pioneer Hall, a heritage building on the site will also be incorporated into the new build. Mr Riach continued that with concept plans established, the work is now focusing on how to translate those ideas into more concrete designs. "It's all about how we make each of the components work to deliver Ashburton's new Library and Civic Centre." Ashburton District Mayor, Neil Brown is encouraging residents to stay up-todate with the project by signing up to the Council's free e-newsletter. "This is an exciting project for our community, and the end result will be quite an upgrade from what we currently have. Make sure you're hearing the latest about this project and other Council news with the help of our e-newsletter by visiting ashburtondc.govt.nz/stayinformed.​"​

Include a photo of the inci