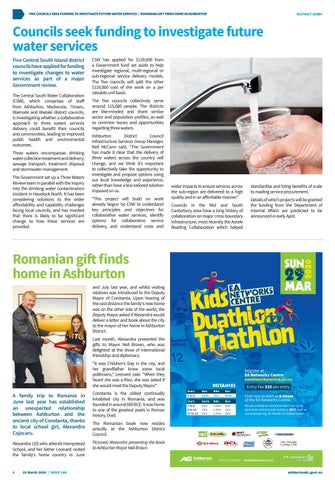 Councils seek funding to investigate future water services Five Central South Island district councils have applied for funding to investigate changes to water services as part of a major Government review. The Central South Water Collaboration (CSW), which comprises of staff from Ashburton, Mackenzie, Timaru, Waimate and Waitaki district councils, is investigating whether a collaborative approach to three waters services delivery could benefit their councils and communities, leading to improved public health and environmental outcomes. Three waters encompasses drinking water collection treatment and delivery, sewage transport, treatment disposal and stormwater management. The Government set up a Three Waters Review team in parallel with the inquiry into the drinking water contamination incident in Havelock North. It has been considering solutions to the wider affordability and capability challenges facing local councils, and has mooted that there is likely to be significant change to how these services are provided.

CSW has applied for $120,000 from a Government fund set aside to help investigate regional, multi-regional or sub-regional service delivery models. The five councils will split the other $120,000 cost of the work on a per rateable unit basis. The five councils collectively serve around 115,000 people. The districts are like-minded and share similar sector and population profiles, as well as common issues and opportunities regarding three waters. Ashburton District Council Infrastructure Services Group Manager, Neil McCann said, "The Government has made it clear that the delivery of three waters across the country will change, and we think it’s important to collectively take the opportunity to investigate and propose options using our local knowledge and experience, rather than have a less tailored solution imposed on us. “This project will build on work already begun by CSW to understand key principles and objectives for collaborative water services, identify options for collaborative service delivery, and understand costs and

wider impacts to ensure services across the sub-region are delivered to a high quality and in an affordable manner.” Councils in the Mid and South Canterbury area have a long history of collaboration on major cross boundary infrastructure, most recently the Aoraki Roading Collaboration which helped

standardise and bring benefits of scale to roading service procurement. Details of which projects will be granted the funding from the Department of Internal Affairs are predicted to be announced in early April.​

Romanian gift finds home in Ashburton and July last year, and whilst visiting relatives was introduced to the Deputy Mayor of Constanta. Upon hearing of the vast distance the family's new home was on the other side of the world, the Deputy Mayor asked if Alexandra would deliver a letter and book about the city to the mayor of her home in Ashburton District. Last month, Alexandra presented the gifts to Mayor Neil Brown, who was delighted at the show of international friendship and diplomacy. "It was Children's Day in the city, and her grandfather knew some local politicians," Leonard said. "When they heard she was a Kiwi, she was asked if she would meet the Deputy Mayor."

​ family trip to Romania in A June last year has established an unexpected relationship between Ashburton and the ancient city of Constanta, thanks to local school girl, Alexandra Cojocaru.

Constanta is the oldest continually inhabited city in Romania, and was founded in around 600 BCE. It was home to one of the greatest poets in Roman history, Ovid.

Alexandra (10) who attends Hampstead School, and her father Leonard visited the family's home country in June