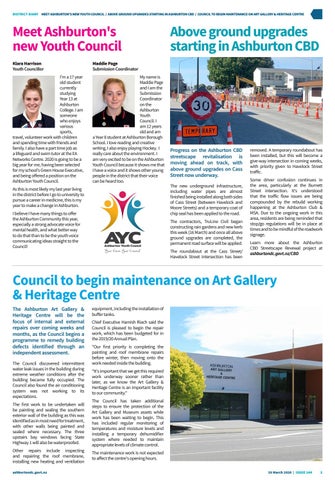 I’m a 17 year old student currently studying Year 13 at Ashburton College. I am someone who enjoys various sports, travel, volunteer work with children and spending time with friends and family. I also have a part time job as a lifeguard and swim tutor at the EA Networks Centre. 2020 is going to be a big year for me, having been selected for my school’s Green House Executive, and being offered a position on the Ashburton Youth Council.

My name is Maddie Page and I am the Submission Coordinator on the Ashburton Youth Council. I am 12 years old and am a Year 8 student at Ashburton Borough School. I love reading and creative writing, I also enjoy playing Hockey. I really care about the environment. I am very excited to be on the Ashburton Youth Council because it shows me that I have a voice and it shows other young people in the district that their voice can be heard too.

As this is most likely my last year living in the district before I go to university to pursue a career in medicine, this is my year to make a change in Ashburton. I believe I have many things to offer the Ashburton Community this year, especially a strong advocate voice for mental health, and what better way to do that than to be the youth voice communicating ideas straight to the Council!​

​ rogress on the Ashburton CBD P streetscape revitalisation is moving ahead on track, with above ground upgrades on Cass Street now underway. The new underground infrastructure, including water pipes are almost finished being installed along both sides of Cass Street (between Havelock and Moore Streets) and a temporary coat of chip seal has been applied to the road. The contractors, TruLine Civil began constructing rain gardens and new kerb this week (16 March) and once all above ground upgrades are completed, the permanent road surface will be applied. The roundabout at the Cass Street/ Havelock Street intersection has been

removed. A temporary roundabout has been installed, but this will become a give-way intersection in coming weeks, with priority given to Havelock Street traffic. Some driver confusion continues in the area, particularly at the Burnett Street intersection. It's understood that the traffic flow issues are being compounded by the rebuild working happening at the Ashburton Club & MSA. Due to the ongoing work in this area, residents are being reminded that stop/go regulations will be in place at times and to be mindful of the roadwork signage. Learn more about the Ashburton CBD Streetscape Revewal project at ashburtondc.govt.nz/CBD

Council to begin maintenance on Art Gallery & Heritage Centre The Ashburton Art Gallery & Heritage Centre will be the focus of internal and external repairs over coming weeks and months, as the Council begins a programme to remedy building defects identified through an independent assessment. The Council discovered intermittent water leak issues in the buildin​g during extreme weather conditions after the building became fully occupied. The Council also found the air conditioning system was not working to its expectations. The first work to be undertaken will be painting and sealing the southern exterior wall of the building as this was identified as in most need for treatment, with other walls being painted and sealed where necessary. The three upstairs bay windows facing State Highway 1 will also be waterproofed. Other repairs include inspecting and repairing the roof membrane, installing new heating and ventilation ashburtondc.govt.nz

equipment, including the installation of buffer tanks. Chief Executive Hamish Riach said the Council is pleased to begin the repair work, which has been budgeted for in the 2019/20 Annual Plan. "Our first priority is completing the painting and roof membrane repairs before winter, then moving onto the work needed inside the building. "It's important that we get this required work underway sooner rather than later, as we know the Art Gallery & Heritage Centre is an important facility to our community." The Council has taken additional steps to ensure the protection of the Art Gallery and Museum assets while work has been waiting to begin. This has included regular monitoring of temperatures and moisture levels and installing a temporary dehumidifier system where needed to maintain appropriate levels of climate control. The maintenance work is not expected to affect the centre's opening hours.​ 19 March 2020 | ISSUE 144