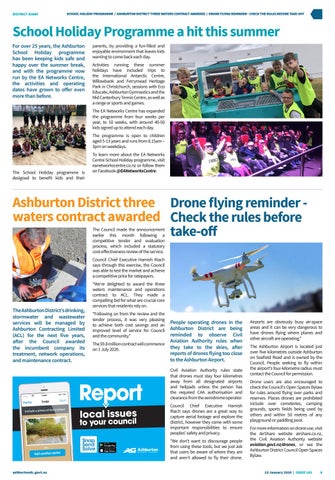 School Holiday Programme a hit this summer For over 25 years, the Ashburton School Holiday programme has been keeping kids safe and happy over the summer break, and with the programme now run by the EA Networks Centre, the activities and operating dates have grown to offer even more than before.

parents, by providing a fun-filled and enjoyable environment that leaves kids wanting to come back each day. Activities running these summer holidays have included trips to the International Antarctic Centre, Willowbank and Ferrymead Heritage Park in Christchurch, sessions with Eco Educate, Ashburton Gymnastics and the Mid Canterbury Tennis Centre, as well as a range or sports and games. The EA Networks Centre has expanded the programme from four weeks per year, to 10 weeks, with around 40-50 kids signed up to attend each day. The programme is open to children aged 5-13 years and runs from 8.15am â&#x20AC;&#x201C; 3pm on weekdays.

The School Holiday programme is designed to benefit kids and their

To learn more about the EA Networks Centre School Holiday programme, visit eanetworkscentre.co.nz or follow them on Facebook @EANetworksCentre.

Ashburton District three Drone flying reminder waters contract awarded Check the rules before take-off The Council made the announcement earlier this month following a competitive tender and evaluation process, which included a statutory cost-effectiveness review of the service. Council Chief Executive Hamish Riach says through this exercise, the Council was able to test the market and achieve a competitive price for ratepayers.

The Ashburton District's drinking, stormwater and wastewater services will be managed by Ashburton Contracting Limited (ACL) for the next five years, after the Council awarded the incumbent company its treatment, network operations, and maintenance contract.

"We're delighted to award the three waters maintenance and operations contract to ACL. They made a compelling bid for what are crucial core services that residents rely on. "Following on from the review and the tender process, it was very pleasing to achieve both cost savings and an improved level of service for Council and the community." The $9.8 million contract will commence on 1 July 2020.â&#x20AC;&#x2039;

Include a photo of the inci

People operating drones in the Ashburton District are being reminded to observe Civil Aviation Authority rules when they take to the skies, after reports of drones flying too close to the Ashburton Airport. Civil Aviation Authority rules state that drones must stay four kilometres away from all designated airports and helipads unless the person has the required CAA authorisation and clearance from the aerodrome operator. Council Chief Executive Hamish Riach says drones are a great way to capture aerial footage and explore the district, however they come with some important responsibilities to ensure peoples' safety and privacy. "We don't want to discourage people from using these tools, but we just ask that users be aware of where they are and aren't allowed to fly their drone.

Airports are obviously busy air-space areas and it can be very dangerous to have drones flying where planes and other aircraft are operating." The Ashburton Airport is located just over five kilometres outside Ashburton on Seafield Road and is owned by the Council. People seeking to fly within the airport's four-kilometre radius must contact the Council for permission. Drone users are also encouraged to check the Council's Open Spaces Bylaw for rules around flying over parks and reserves. Places drones are prohibited include over cemeteries, camping grounds, sports fields being used by others and within 50 metres of any playground or paddling pool. For more information on drone use, visit the AirShare website airshare.co.nz, the Civil Aviation Authority website aviation.govt.nz/drones, or see the Ashburton District Council Open Spaces Bylaw. 23 January 2020 | ISSUE 142