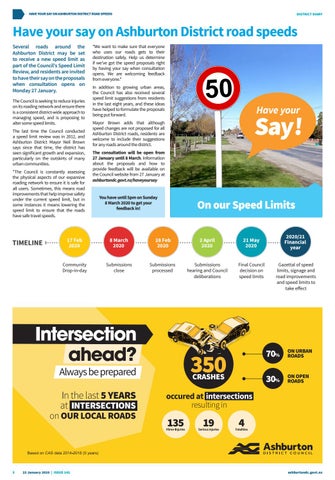 HAVE YOUR SAY ON ASHBURTON DISTRICT ROAD SPEEDS

Have your say on Ashburton District road speeds Several roads around the Ashburton District may be set to receive a new speed limit as part of the Council's Speed Limit Review, and residents are invited to have their say on the proposals when consultation opens on Monday 27 January. The Council is seeking to reduce injuries on its roading network and ensure there is a consistent district-wide approach to managing speed, and is proposing to alter some speed limits. The last time the Council conducted a speed limit review was in 2012, and Ashburton District Mayor Neil Brown says since that time, the district has seen significant growth and expansion, particularly on the outskirts of many urban communities. "The Council is constantly assessing the physical aspects of our expansive roading network to ensure it is safe for all users. Sometimes, this means road improvements that help improve safety under the current speed limit, but in some instances it means lowering the speed limit to ensure that the roads have safe travel speeds.

"We want to make sure that everyone who uses our roads gets to their destination safely. Help us determine if we've got the speed proposals right by having your say when consultation opens. We are welcoming feedback from everyone." In addition to growing urban areas, the Council has also received several speed limit suggestions from residents in the last eight years, and these ideas have helped to formulate the proposals being put forward.

Mayor Brown adds that although speed changes are not proposed for all Ashburton District roads, residents are welcome to include their suggestions for any roads around the district. The consultation will be open from 27 January until 8 March. Information about the proposals and how to provide feedback will be available on the Council website from 27 January at ashburtondc.govt.nz/haveyoursay You have until 5pm on Sunday 8 March 2020 to get your feedback in!

On our Speed Limits