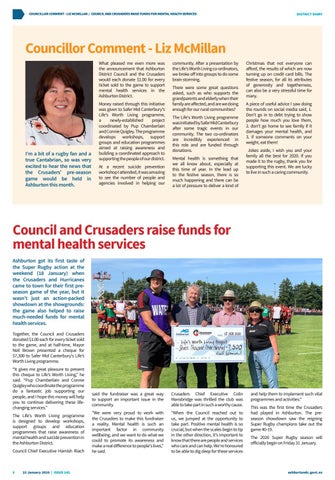 Councillor Comment - Liz McMillan What pleased me even more was the announcement that Ashburton District Council and the Crusaders would each donate $1.00 for every ticket sold to the game to support mental health services in the Ashburton District.

I’m a bit of a rugby fan and a true Cantabrian, so was very excited to hear the news that the Crusaders' pre-season game would be held in Ashburton this month.

Money raised through this initiative was given to Safer Mid Canterbury's Life's Worth Living programme, a newly-established project coordinated by Pup Chamberlain and Connie Quigley. The programme develops workshops, support groups and education programmes aimed at raising awareness and building a coordinated approach to supporting the people of our district. At a recent suicide prevention workshop I attended, it was amazing to see the number of people and agencies involved in helping our

community. After a presentation by the Life's Worth Living co-ordinators, we broke off into groups to do some brain storming. There were some great questions asked, such as who supports the grandparents and elderly when their family are affected, and are we doing enough for our rural communities? The Life's Worth Living programme was initiated by Safer Mid Canterbury after some tragic events in our community. The two co-ordinators are incredibly experienced in this role and are funded through donations. Mental health is something that we all know about, especially at this time of year. In the lead up to the festive season, there is so much happening and there can be a lot of pressure to deliver a kind of

Christmas that not everyone can afford, the results of which are now turning up on credit card bills. The festive season, for all its attributes of generosity and togetherness, can also be a very stressful time for many. A piece of useful advice I saw doing the rounds on social media said, 1. Don't go in to debt trying to show people how much you love them, 2. don't go home to see family if it damages your mental health, and 3. if someone comments on your weight, eat them! Jokes aside, I wish you and your family all the best for 2020. If you made it to the rugby, thank you for supporting this event. We are lucky to live in such a caring community.

Council and Crusaders raise funds for mental health services Ashburton got its first taste of the Super Rugby action at the weekend (18 January) when the Crusaders and Hurricanes came to town for their first preseason game of the year, but it wasn’t just an action-packed showdown at the showgrounds: the game also helped to raise much-needed funds for mental health services. Together, the Council and Crusaders donated $1.00 each for every ticket sold to the game, and at half-time, Mayor Neil Brown presented a cheque for $7,300 to Safer Mid Canterbury’s Life’s Worth Living programme. “It gives me great pleasure to present this cheque to Life’s Worth Living,” he said. “Pup Chamberlain and Connie Quigley who coordinate the programme do a fantastic job supporting our people, and I hope this money will help you to continue delivering these lifechanging services.” The Life's Worth Living programme is designed to develop workshops, support groups and education programmes that raise awareness of mental health and suicide prevention in the Ashburton District. Council Chief Executive Hamish Riach

said the fundraiser was a great way to support an important issue in the community.

Crusaders Chief Executive Colin Mansbridge was thrilled the club was able to take part in such a worthy cause.

"We were very proud to work with the Crusaders to make this fundraiser a reality. Mental health is such an important factor in community wellbeing, and we want to do what we could to promote its awareness and make a real difference to people's lives," he said.

"When the Council reached out to us, we jumped at the opportunity to take part. Positive mental health is so crucial, but when the scales begin to tip in the other direction, it's important to know that there are people and services who care and can help. We're honoured to be able to dig deep for these services

and help them to implement such vital programmes and activities." This was the first time the Crusaders had played in Ashburton. The preseason showdown saw the reigning Super Rugby champions take out the game 40-19. The 2020 Super Rugby season will officially begin on Friday 31 January.