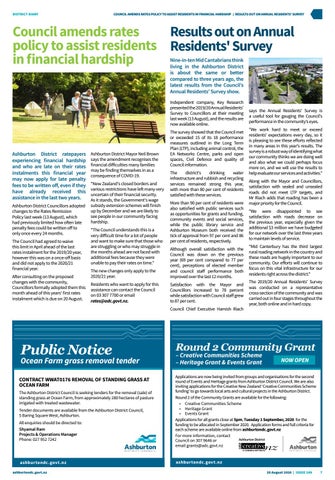 Council amends rates Results out on Annual policy to assist residents Residents' Survey in financial hardship Nine-in-ten Mid Cantabrians think living in the Ashburton District is about the same or better compared to three years ago, the latest results from the Council's Annual Residents' Survey show.

Ashburton District ratepayers experiencing financial hardship and who are late on their rates instalments this financial year may now apply for late penalty fees to be written off, even if they have already received this assistance in the last two years. Ashburton District Councillors adopted changes to the Rates Remission Policy last week (13 August), which had previously limited how often late penalty fees could be written off to only once every 24 months. The Council had agreed to waive this limit in April ahead of the last rates instalment for the 2019/20 year, however this was on a once-off basis and did not apply to the 2020/21 financial year. After consulting on the proposed changes with the community, Councillors formally adopted them this month ahead of this years' first rates instalment which is due on 20 August.

Ashburton District Mayor Neil Brown says the amendment recognises the financial difficulties many families may be finding themselves in as a consequence of COVID-19. "New Zealand's closed borders and various restrictions have left many very uncertain of their financial security. As it stands, the Government's wage subsidy extension schemes will finish up by December and we are likely to see people in our community facing hardship. "The Council understands this is a very difficult time for a lot of people and want to make sure that those who are struggling or who may struggle in the months ahead are not faced with additional fees because they were unable to pay their rates on time."

The survey showed that the Council met or exceeded 15 of its 18 performance measures outlined in the Long Term Plan (LTP), including animal control, the EA Networks Centre, parks and open spaces, Civil Defence and quality of Council information. The district's drinking water infrastructure and rubbish and recycling services remained strong this year, with more than 80 per cent of residents satisfied with these services. More than 90 per cent of residents were also satisfied with public services such as opportunities for grants and funding, community events and social services, while the public library service and Ashburton Museum both received the tick of approval from 97 per cent and 86 per cent of residents, respectively.

Although overall satisfaction with the Council was down on the previous year (69 per cent compared to 77 per cent), perceptions of elected member and council staff performance both improved over the last 12 months.

Residents who want to apply for this assistance can contact the Council on 03 307 7700 or email rates@adc.govt.nz​.

says the Annual Residents' Survey is a useful tool for gauging the Council's performance in the community's eyes. "We work hard to meet or exceed residents' expectations every day, so it is pleasing to see these efforts reflected in many areas in this year's results. The survey is a robust way of identifying what our community thinks we are doing well and also what we could perhaps focus more on, and we will use the results to help evaluate our services and activities." Along with the Mayor and Councillors, satisfaction with sealed and unsealed roads did not meet LTP targets, and Mr Riach adds that roading has been a major priority for the Council. "We were disappointed to see satisfaction with roads decrease on the previous year, especially given the additional $3 million we have budgeted for our network over the last three years to maintain levels of service. "Mid Canterbury has the third largest rural roading network in the country and these roads are hugely important to our community. Our efforts will continue to focus on this vital infrastructure for our residents right across the district." The 2019/20 Annual Residents' Survey was conducted on a representative cross-section of the community and was carried out in four stages throughout the year, both online and in hard copy.​

Applications are now being invited from groups and organisations for the second round of Events and Heritage grants from Ashburton District Council. We are also inviting applications for the Creative New Zealand ‘Creative Communities Scheme funding’ to go towards local arts and cultural projects in the Ashburton District. Round 2 of the Community Grants are available for the following: • Creative Communities Scheme • Heritage Grant • Events Grant Applications for all grants close at 5pm, Tuesday 1 September, 2020 for the funding to be allocated in September 2020. Application forms and full criteria for each scheme are available online from ashburtondc.govt.nz For more information, contact Council on 307 9646 or email grants@adc.govt.nz