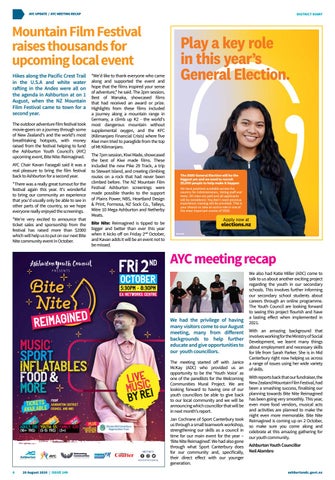 Mountain Film Festival raises thousands for upcoming local event Hikes along the Pacific Crest Trail in the U.S.A and white water rafting in the Andes were all on the agenda in Ashburton at on 1 August, when the NZ Mountain Film Festival came to town for a second year. ​ he outdoor adventure film festival took T movie-goers on a journey through some of New Zealand's and the world's most breathtaking hotspots, with money raised from the festival helping to fund the Ashburton Youth Council's (AYC) upcoming event, Bite Nite: Reimagined. AYC Chair Kavan Faoagali said it was a real pleasure to bring the film festival back to Ashburton for a second year. "There was a really great turnout for the festival again this year. It's wonderful to bring our community an experience that you'd usually only be able to see in other parts of the country, so we hope everyone really enjoyed the screenings. "We're very excited to announce that ticket sales and sponsorship from the festival has raised more than $2000 which will help us to put on our next Bite Nite community event in October.

"We'd like to thank everyone who came along and supported the event and hope that the films inspired your sense of adventure," he said. The 2pm session, Best of Wanaka, showcased films that had received an award or prize. Highlights from these films included a journey along a mountain range in Germany, a climb up K2 - the world's most dangerous mountain without supplemental oxygen, and the KFC (Kilimanjaro Financial Crisis) where five Kiwi men tried to paraglide from the top of Mt Kilimanjaro. The 7pm session, Kiwi Made, showcased the best of Kiwi made films. These included the new Pike 29 Track, a trip to Stewart Island, and creating climbing routes on a rock that had never been climbed before. The NZ Mountain Film Festival Ashburton screenings were made possible thanks to the support of Plains Power, NBS, Heartland Design & Print, Formosa, NZ Sock Co., Talleys, Mitre 10 Mega Ashburton and Netherby Meats.​ Bite Nite: Reimagined is tipped to be bigger and better than ever this year when it kicks off on Friday 2nd October, and Kavan adds it will be an event not to be missed.

Play a key role in this year’s General Election.

The 2020 General Election will be the biggest yet and we need to recruit 25,000 people to help make it happen We have positions available across the country for Administrators, Voting staff and more. All roles are paid and all applicants will be considered. You don’t need previous experience; training will be provided. This is your chance to take an active role in one of the most important events of 2020.

We had the privilege of having many visitors come to our August meeting, many from different backgrounds to help further educate and give opportunities to our youth councillors. The meeting started off with Janice McKay (ADC) who provided us an opportunity to be the ‘Youth Voice’ as one of the panellists for the Welcoming Communities Mural Project. We are looking forward to having one of our youth councillors be able to give back to our local community and we will be announcing which councillor that will be in next month’s report. Jan Cochrane of Sport Canterbury took us through a small teamwork workshop, strengthening our skills as a council in time for our main event for the year – ‘Bite Nite Reimagined’. We had also gone through what Sport Canterbury does for our community and, specifically, their direct effect with our younger generation. 6

We also had Katie Miller (ADC) come to talk to us about another exciting project regarding the youth in our secondary schools. This involves further informing our secondary school students about careers through an online programme. The Youth Council are looking forward to seeing this project flourish and have a lasting effect when implemented in 2021. With an amazing background that involves working for the Ministry of Social Development, we learnt many things about employment and necessary skills for life from Sarah Parker. She is in Mid Canterbury right now helping us across a range of issues using her wide variety of skills. With reports back that our fundraiser, the New Zealand Mountain Film Festival, had been a smashing success, finalising our planning towards Bite Nite Reimagined has been going very smoothly. This year, even more food vendors, musical acts and activities are planned to make the night even more memorable. Bite Nite Reimagined is coming up on 2 October, so make sure you come along and celebrate at this amazing gathering for our youth community. Ashburton Youth Councillor Neil Alombro