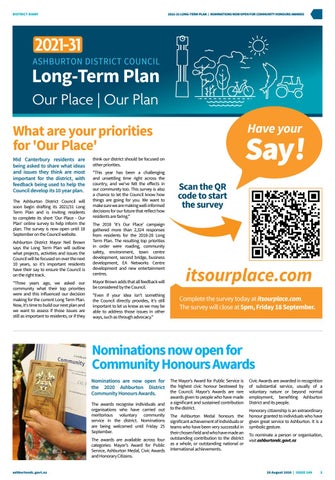 Long-Term Plan Our Place | Our Plan Have your

What are your priorities for 'Our Place' Mid Canterbury residents are being asked to share what ideas and issues they think are most important for the district, with feedback being used to help the Council develop its 10 year plan. The Ashburton District Council will soon begin drafting its 2021/31 Long Term Plan and is inviting residents to complete its short 'Our Place - Our Plan' online survey to help inform the plan. The survey is now open until 18 September on the Council website. Ashburton District Mayor Neil Brown says the Long Term Plan will outline what projects, activities and issues the Council will be focused on over the next 10 years, so it's important residents have their say to ensure the Council is on the right track. "Three years ago, we asked our community what their top priorities were and this influenced our decision making for the current Long Term Plan. Now, it's time to build our next plan and we want to assess if those issues are still as important to residents, or if they

think our district should be focused on other priorities. "This year has been a challenging and unsettling time right across the country, and we've felt the effects in our community too. This survey is also a chance to let the Council know how things are going for you. We want to make sure we are making well-informed decisions for our future that reflect how residents are faring." The 2018 'It's Our Place' campaign gathered more than 2,324 responses from residents for the 2018-28 Long Term Plan. The resulting top priorities in order were roading, community safety, environment, town centre development, second bridge, business development, EA Networks Centre development and new entertainment centres. Mayor Brown adds that all feedback will be considered by the Council. "Even if your idea isn't something the Council directly provides, it's still important to let us know as we may be able to address those issues in other ways, such as through advocacy."

Scan the QR code to start the survey

Nominations now open for Community Honours Awards Nominations are now open for The Mayor’s Award for Public Service is the 2020 Ashburton District the highest civic honour bestowed by the Council. Mayor’s Awards are rare Community Honours Awards. The awards recognise individuals and organisations who have carried out meritorious voluntary community service in the district. Nominations are being welcomed until Friday 25 September. The awards are available across four categories: Mayor's Award for Public Service, Ashburton Medal, Civic Awards and Honorary Citizens. ashburtondc.govt.nz

Civic Awards are awarded in recognition of substantial service, usually of a voluntary nature or beyond normal employment, benefiting Ashburton District and its people. Honorary citizenship is an extraordinary honour granted to individuals who have given great service to Ashburton. It is a symbolic gesture. To nominate a person or organisation, visit ashburtondc.govt.nz