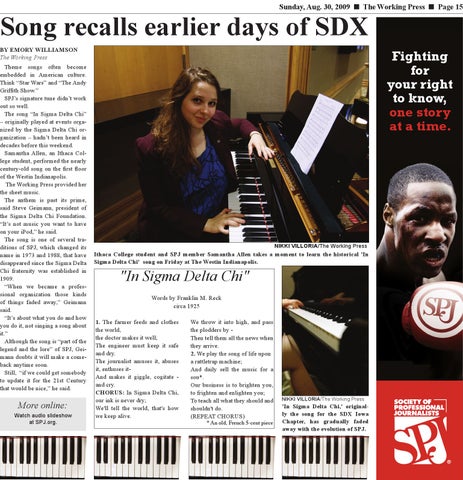 Song recalls earlier days of SDX By Emory Williamson The Working Press Theme songs often become embedded in American culture. Think “Star Wars” and “The Andy Griffith Show.” SPJ’s signature tune didn’t work out so well. The song “In Sigma Delta Chi” – originally played at events organized by the Sigma Delta Chi organization – hadn’t been heard in decades before this weekend. Samantha Allen, an Ithaca College student, performed the nearly century-old song on the first floor of the Westin Indianapolis. The Working Press provided her the sheet music. The anthem is past its prime, said Steve Geimann, president of the Sigma Delta Chi Foundation. “It’s not music you want to have on your iPod,” he said. The song is one of several traditions of SPJ, which changed its name in 1973 and 1988, that have disappeared since the Sigma Delta Chi fraternity was established in 1909. “When we became a professional organization those kinds of things faded away,” Geimann said. “It’s about what you do and how you do it, not singing a song about it.” Although the song is “part of the legend and the lore” of SPJ, Geimann doubts it will make a comeback anytime soon. Still, “if we could get somebody to update it for the 21st Century that would be nice,” he said.

Fighting for your right to know, one story at a time.

Ithaca College student and SPJ member Samantha Allen takes a moment to learn the historical 'In Sigma Delta Chi' song on Friday at The Westin Indianapolis.

"In Sigma Delta Chi" Words by Franklin M. Reck circa 1925

1. The farmer feeds and clothes the world, the doctor makes it well; The engineer must keep it safe and dry. The journalist amuses it, abuses it, enthuses itAnd makes it giggle, cogitate and cry. CHORUS: In Sigma Delta Chi, our ink is never dry; We'll tell the world, that's how we keep alive.

We throw it into high, and pass the plodders by Then tell them all the news when they arrive. 2. We play the song of life upon a rattletrap machine; And daily sell the music for a sou*. Our business is to brighten you, to frighten and enlighten you; To teach all what they should and shouldn't do. (REPEAT CHORUS) * An old, French 5-cent piece

'In Sigma Delta Chi,' originally the song for the SDX Iowa Chapter, has gradually faded away with the evolution of SPJ.