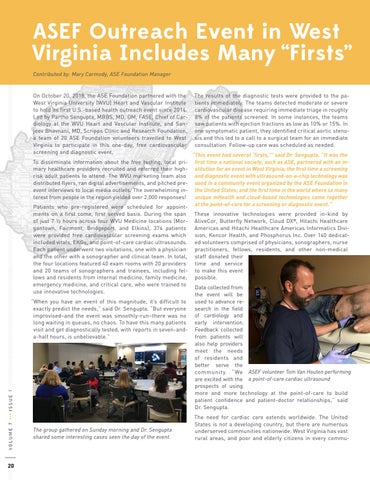 On October 20, 2018, the ASE Foundation partnered with the The results of the diagnostic tests were provided to the paWest Virginia University (WVU) Heart and Vascular Institute tients immediately. The teams detected moderate or severe to hold its first U.S.-based health outreach event since 2014. cardiovascular disease requiring immediate triage in roughly Led by Partho Sengupta, MBBS, MD, DM, FASE, Chief of Car- 8% of the patients screened. In some instances, the teams diology at the WVU Heart and Vascular Institute, and San- saw patients with ejection fractions as low as 10% or 15%. In jeev Bhavnani, MD, Scripps Clinic and Research Foundation, one symptomatic patient, they identified critical aortic stenoa team of 20 ASE Foundation volunteers travelled to West sis and this led to a call to a surgical team for an immediate Virginia to participate in this one-day, free cardiovascular consultation. Follow-up care was scheduled as needed. screening and diagnostic event. “This event had several ‘firsts,’” said Dr. Sengupta. “It was the To disseminate information about the free testing, local pri- first time a national society, such as ASE, partnered with an inmary healthcare providers recruited and referred their high- stitution for an event in West Virginia; the first time a screening risk adult patients to attend. The WVU marketing team also and diagnostic event with ultrasound-on-a-chip technology was distributed flyers, ran digital advertisements, and pitched pre- used in a community event organized by the ASE Foundation in event interviews to local media outlets. The overwhelming in- the United States; and the first time in the world where so many terest from people in the region yielded over 2,000 responses! unique mHealth and cloud-based technologies came together at the point-of-care for a screening or diagnostic event.” Patients who pre-registered were scheduled for appointments on a first come, first served basis. During the span of just 7 ½ hours across four WVU Medicine locations (Morgantown, Fairmont, Bridgeport, and Elkins), 374 patients were provided free cardiovascular screening exams which included vitals, EKGs, and point-of-care cardiac ultrasounds. Each patient underwent two visitations, one with a physician and the other with a sonographer and clinical team. In total, the four locations featured 40 exam rooms with 20 providers and 20 teams of sonographers and trainees, including fellows and residents from internal medicine, family medicine, emergency medicine, and critical care, who were trained to use innovative technologies. “When you have an event of this magnitude, it’s difficult to exactly predict the needs,” said Dr. Sengupta. “But everyone improvised–and the event was smoothly-run–there was no long waiting in queues, no chaos. To have this many patients visit and get diagnostically tested, with reports in seven-anda-half hours, is unbelievable.”

The group gathered on Sunday morning and Dr. Sengupta shared some interesting cases seen the day of the event.

These innovative technologies were provided in-kind by AliveCor, Butterfly Network, Cloud DX®, Hitachi Healthcare Americas and Hitachi Healthcare Americas Informatics Division, Kencor Health, and Phosphorus Inc. Over 140 dedicated volunteers comprised of physicians, sonographers, nurse practitioners, fellows, residents, and other non-medical staff donated their time and service to make this event possible. Data collected from the event will be used to advance research in the field of cardiology and early intervention. Feedback collected from patients will also help providers meet the needs of residents and better serve the community. “ We ASEF volunteer Tom Van Houten performing are excited with the a point-of-care cardiac ultrasound prospects of using more and more technology at the point-of-care to build patient confidence and patient-doctor relationships,” said Dr. Sengupta. The need for cardiac care extends worldwide. The United States is not a developing country, but there are numerous underserved communities nationwide. West Virginia has vast rural areas, and poor and elderly citizens in every commu- 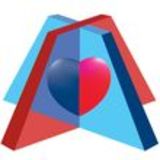