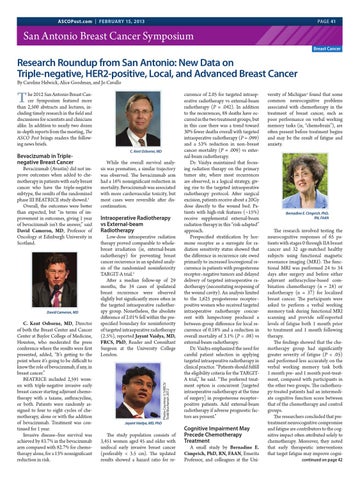 he 2012 San Antonio Breast Cancer Symposium featured more than 2,500 abstracts and lectures, including timely research in the field and discussions for scientists and clinicians alike. In addition to nearly two dozen in-depth reports from the meeting, The ASCO Post brings readers the following news briefs.

Bevacizumab (Avastin) did not improve outcomes when added to chemotherapy in patients with early breast cancer who have the triple-negative subtype, the results of the randomized phase III BEATRICE study showed.1 Overall, the outcomes were better than expected, but “in terms of improvement in outcomes, giving 1 year of bevacizumab isn’t the answer,” said David Cameron, MD, Professor of Oncology at Edinburgh University in Scotland.

C. Kent Osborne, MD, Director of both the Breast Center and Cancer Center at Baylor College of Medicine, Houston, who moderated the press conference where the results were first presented, added, “It’s getting to the point where it’s going to be difficult to know the role of bevacizumab, if any, in breast cancer.” BEATRICE included 2,591 women with triple-negative invasive early breast cancer starting adjuvant chemotherapy with a taxane, anthracycline, or both. Patients were randomly assigned to four to eight cycles of chemotherapy, alone or with the addition of bevacizumab. Treatment was continued for 1 year. Invasive disease–free survival was achieved by 83.7% in the bevacizumab arm compared with 82.7% for chemotherapy alone, for a 13% nonsignificant reduction in risk.

While the overall survival analysis was premature, a similar trajectory was observed. The bevacizumab arm had a 16% nonsignificant reduction in mortality. Bevacizumab was associated with more cardiovascular toxicity, but most cases were reversible after discontinuation.

The study population consists of 3,451 women aged 45 and older with unifocal early invasive breast cancer (preferably < 3.5 cm). The updated results showed a hazard ratio for re-

versity of Michigan3 found that some common neurocognitive problems associated with chemotherapy in the treatment of breast cancer, such as poor performance on verbal working memory tasks (ie, “chemobrain”), are often present before treatment begins and may be the result of fatigue and anxiety.

The research involved testing the neurocognitive responses of 65 patients with stages 0 through IIA breast cancer and 32 age-matched healthy subjects using functional magnetic resonance imaging (MRI). The functional MRI was performed 24 to 34 days after surgery and before either adjuvant anthracycline-based combination chemotherapy (n =  28) or radiotherapy (n  =  37) for localized breast cancer. The participants were asked to perform a verbal working memory task during functional MRI scanning and provide self-reported levels of fatigue both 1  month prior to treatment and 1  month following therapy. The findings showed that the chemotherapy group had significantly greater severity of fatigue (P  < .05) and performed less accurately on the verbal working memory task both 1 month pre- and 1 month post-treatment, compared with participants in the other two groups. The radiotherapy-treated patients had an intermediate cognitive function score between that of the chemotherapy and control groups. The researchers concluded that pretreatment neurocognitive compromise and fatigue are contributors to the cognitive impact often attributed solely to chemotherapy. Moreover, they noted that early therapeutic interventions that target fatigue may improve cognicontinued on page 42 In patients with treatment-naive metastatic pancreatic cancer, the addition of nanoparticle albumin-bound (nab)-paclitaxel (Abraxane) to gem...

In patients with treatment-naive metastatic pancreatic cancer, the addition of nanoparticle albumin-bound (nab)-paclitaxel (Abraxane) to gem...