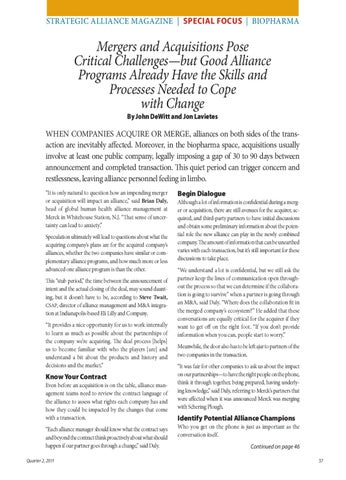 WHEN COMPANIES ACQUIRE OR MERGE, alliances on both sides of the transaction are inevitably affected. Moreover, in the biopharma space, acquisitions usually involve at least one public company, legally imposing a gap of 30 to 90 days between announcement and completed transaction. This quiet period can trigger concern and restlessness, leaving alliance personnel feeling in limbo. “It is only natural to question how an impending merger or acquisition will impact an alliance,” said Brian Daly, head of global human health alliance management at Merck in Whitehouse Station, N.J. “That sense of uncertainty can lead to anxiety.” Speculation ultimately will lead to questions about what the acquiring company’s plans are for the acquired company’s alliances, whether the two companies have similar or complementary alliance programs, and how much more or less advanced one alliance program is than the other. This “stub period,” the time between the announcement of intent and the actual closing of the deal, may sound daunting, but it doesn’t have to be, according to Steve Twait, CSAP, director of alliance management and M&A integration at Indianapolis-based Eli Lilly and Company. “It provides a nice opportunity for us to work internally to learn as much as possible about the partnerships of the company we’re acquiring. The deal process [helps] us to become familiar with who the players [are] and understand a bit about the products and history and decisions and the market.”

Know Your Contract Even before an acquisition is on the table, alliance management teams need to review the contract language of the alliance to assess what rights each company has and how they could be impacted by the changes that come with a transaction. “Each alliance manager should know what the contract says and beyond the contract think proactively about what should happen if our partner goes through a change,” said Daly. Quarter 2, 2011

Begin Dialogue Although a lot of information is confidential during a merger or acquisition, there are still avenues for the acquirer, acquired, and third-party partners to have initial discussions and obtain some preliminary information about the potential role the new alliance can play in the newly combined company. The amount of information that can be unearthed varies with each transaction, but it’s still important for these discussions to take place. “We understand a lot is confidential, but we still ask the partner keep the lines of communication open throughout the process so that we can determine if the collaboration is going to survive” when a partner is going through an M&A, said Daly. “Where does the collaboration fit in the merged company’s ecosystem?” He added that these conversations are equally critical for the acquirer if they want to get off on the right foot. “If you don’t provide information when you can, people start to worry.” Meanwhile, the door also has to be left ajar to partners of the two companies in the transaction. “It was fair for other companies to ask us about the impact on our partnerships—to have the right people on the phone, think it through together, being prepared, having underlying knowledge,” said Daly, referring to Merck’s partners that were affected when it was announced Merck was merging with Schering Plough.

Identify Potential Alliance Champions Who you get on the phone is just as important as the conversation itself. Continued on page 46 37