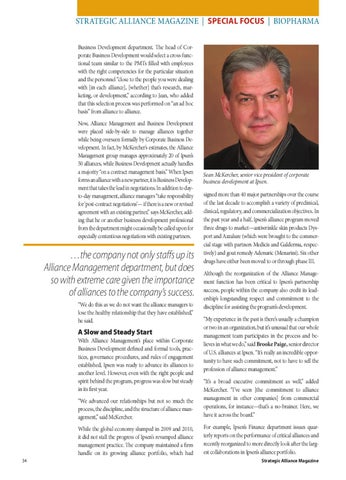 strategic alliance magazine | special focus | bioPharma Business Development department. The head of Corporate Business Development would select a cross-functional team similar to the PMTs filled with employees with the right competencies for the particular situation and the personnel “close to the people you were dealing with [in each alliance], [whether] that’s research, marketing, or development,” according to Jean, who added that this selection process was performed on “an ad hoc basis” from alliance to alliance. Now, Alliance Management and Business Development were placed side-by-side to manage alliances together while being overseen formally by Corporate Business Development. In fact, by McKercher’s estimates, the Alliance Management group manages approximately 20 of Ipsen’s 50 alliances, while Business Development actually handles a majority “on a contract management basis.” When Ipsen forms an alliance with a new partner, it is Business Development that takes the lead in negotiations. In addition to dayto-day management, alliance managers “take responsibility for ‘post-contract negotiations’— if there is a new or revised agreement with an existing partner,” says McKercher, adding that he or another business development professional from the department might occasionally be called upon for especially contentious negotiations with existing partners.

…the company not only staffs up its Alliance Management department, but does so with extreme care given the importance of alliances to the company’s success. “We do this as we do not want the alliance managers to lose the healthy relationship that they have established,” he said.

A Slow and Steady Start With Alliance Management’s place within Corporate Business Development defined and formal tools, practices, governance procedures, and rules of engagement established, Ipsen was ready to advance its alliances to another level. However, even with the right people and spirit behind the program, progress was slow but steady in its first year.

Sean McKercher, senior vice president of corporate business development at Ipsen. signed more than 40 major partnerships over the course of the last decade to accomplish a variety of preclinical, clinical, regulatory, and commercialization objectives. In the past year and a half, Ipsen’s alliance program moved three drugs to market—antiwrinkle skin products Dysport and Azzalure (which were brought to the commercial stage with partners Medicis and Galderma, respectively) and gout remedy Adenuric (Menarini). Six other drugs have either been moved to or through phase III. Although the reorganization of the Alliance Management function has been critical to Ipsen’s partnership success, people within the company also credit its leadership’s longstanding respect and commitment to the discipline for assisting the program’s development. “My experience in the past is there’s usually a champion or two in an organization, but it’s unusual that our whole management team participates in the process and believes in what we do,” said Brooke Paige, senior director of U.S. alliances at Ipsen. “It’s really an incredible opportunity to have such commitment, not to have to sell the profession of alliance management.”

“We advanced our relationships but not so much the process, the discipline, and the structure of alliance management,” said McKercher.

“It’s a broad executive commitment as well,” added McKercher. “I’ve seen [the commitment to alliance management in other companies] from commercial operations, for instance—that’s a no-brainer. Here, we have it across the board.”

While the global economy slumped in 2009 and 2010, it did not stall the progress of Ipsen’s revamped alliance management practice. The company maintained a firm handle on its growing alliance portfolio, which had