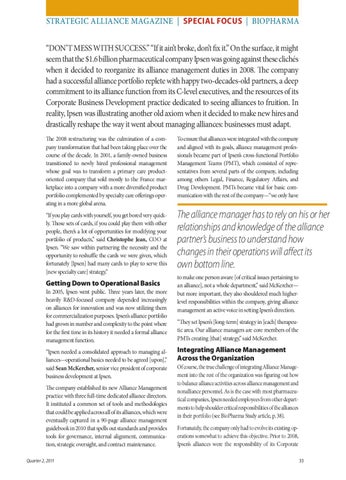 STRATEGIC ALLIANCE MAGAZINE | SPECIAL FOCUS | BIOPHARMA “DON’T MESS WITH SUCCESS.” “If it ain’t broke, don’t fix it.” On the surface, it might seem that the $1.6 billion pharmaceutical company Ipsen was going against these clichés when it decided to reorganize its alliance management duties in 2008. The company had a successful alliance portfolio replete with happy two-decades-old partners, a deep commitment to its alliance function from its C-level executives, and the resources of its Corporate Business Development practice dedicated to seeing alliances to fruition. In reality, Ipsen was illustrating another old axiom when it decided to make new hires and drastically reshape the way it went about managing alliances: businesses must adapt. The 2008 restructuring was the culmination of a company transformation that had been taking place over the course of the decade. In 2001, a family-owned business transitioned to newly hired professional management whose goal was to transform a primary care productoriented company that sold mostly to the France marketplace into a company with a more diversified product portfolio complemented by specialty care offerings operating in a more global arena.

To ensure that alliances were integrated with the company and aligned with its goals, alliance management professionals became part of Ipsen’s cross-functional Portfolio Management Teams (PMT), which consisted of representatives from several parts of the company, including among others Legal, Finance, Regulatory Affairs, and Drug Development. PMTs became vital for basic communication with the rest of the company—“we only have

“If you play cards with yourself, you get bored very quickly. Those sets of cards, if you could play them with other people, there’s a lot of opportunities for modifying your portfolio of products,” said Christophe Jean, COO at Ipsen. “We saw within partnering the necessity and the opportunity to reshuﬄe the cards we were given, which fortunately [Ipsen] had many cards to play to serve this [new specialty care] strategy.”

The alliance manager has to rely on his or her relationships and knowledge of the alliance partner’s business to understand how changes in their operations will affect its own bottom line.

Getting Down to Operational Basics In 2005, Ipsen went public. Three years later, the more heavily R&D-focused company depended increasingly on alliances for innovation and was now utilizing them for commercialization purposes. Ipsen’s alliance portfolio had grown in number and complexity to the point where for the first time in its history it needed a formal alliance management function. “Ipsen needed a consolidated approach to managing alliances—operational basics needed to be agreed [upon],” said Sean McKercher, senior vice president of corporate business development at Ipsen. The company established its new Alliance Management practice with three full-time dedicated alliance directors. It instituted a common set of tools and methodologies that could be applied across all of its alliances, which were eventually captured in a 90-page alliance management guidebook in 2010 that spells out standards and provides tools for governance, internal alignment, communication, strategic oversight, and contract maintenance. Quarter 2, 2011

to make one person aware [of critical issues pertaining to an alliance], not a whole department,” said McKercher— but more important, they also shouldered much higherlevel responsibilities within the company, giving alliance management an active voice in setting Ipsen’s direction. “They set Ipsen’s [long-term] strategy in [each] therapeutic area. Our alliance managers are core members of the PMTs creating [that] strategy,” said McKercher.

Integrating Alliance Management Across the Organization Of course, the true challenge of integrating Alliance Management into the rest of the organization was figuring out how to balance alliance activities across alliance management and nonalliance personnel. As is the case with most pharmaceutical companies, Ipsen needed employees from other departments to help shoulder critical responsibilities of the alliances in their portfolio (see BioPharma Study article, p. 38). Fortunately, the company only had to evolve its existing operations somewhat to achieve this objective. Prior to 2008, Ipsen’s alliances were the responsibility of its Corporate 33