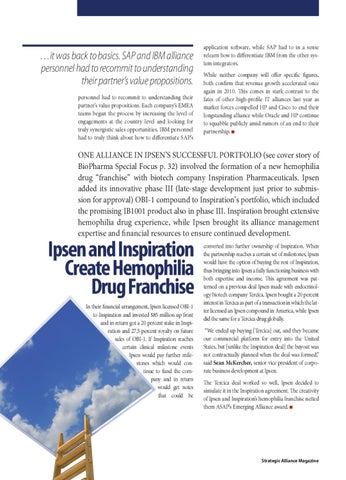 application software, while SAP had to in a sense relearn how to differentiate IBM from the other system integrators. While neither company will offer specific figures, both confirm that revenue growth accelerated once again in 2010. This comes in stark contrast to the fates of other high-profile IT alliances last year as market forces compelled HP and Cisco to end their longstanding alliance while Oracle and HP continue to squabble publicly amid rumors of an end to their partnership. n

Ipsen and Inspiration Create Hemophilia Drug Franchise In their financial arrangement, Ipsen licensed OBI-1 to Inspiration and invested $85 million up front and in return got a 20 percent stake in Inspiration and 27.5 percent royalty on future sales of OBI-1. If Inspiration reaches certain clinical milestone events Ipsen would pay further milestones which would continue to fund the company and in return would get notes that could be

converted into further ownership of Inspiration. When the partnership reaches a certain set of milestones, Ipsen would have the option of buying the rest of Inspiration, thus bringing into Ipsen a fully functioning business with both expertise and income. This agreement was patterned on a previous deal Ipsen made with endocrinology biotech company Tercica. Ipsen bought a 20 percent interest in Tercica as part of a transaction in which the latter licensed an Ipsen compound in America, while Ipsen did the same for a Tercica drug globally. “We ended up buying [Tercica] out, and they became our commercial platform for entry into the United States, but [unlike the Inspiration deal] the buyout was not contractually planned when the deal was formed,” said Sean McKercher, senior vice president of corporate business development at Ipsen. The Tercica deal worked so well, Ipsen decided to simulate it in the Inspiration agreement. The creativity of Ipsen and Inspiration’s hemophilia franchise netted them ASAP’s Emerging Alliance award. n