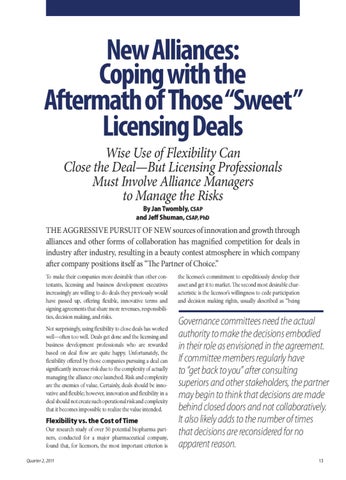 New Alliances: Coping with the Aftermath of Those “Sweet” Licensing Deals Wise Use of Flexibility Can Close the Deal—But Licensing Professionals Must Involve Alliance Managers to Manage the Risks By Jan Twombly, CSAP and Jeff Shuman, CSAP, PhD

The aggressive pursuit of new sources of innovation and growth through alliances and other forms of collaboration has magnified competition for deals in industry after industry, resulting in a beauty contest atmosphere in which company after company positions itself as “The Partner of Choice.” To make their companies more desirable than other contestants, licensing and business development executives increasingly are willing to do deals they previously would have passed up, offering flexible, innovative terms and signing agreements that share more revenues, responsibilities, decision making, and risks. Not surprisingly, using flexibility to close deals has worked well—often too well. Deals get done and the licensing and business development professionals who are rewarded based on deal flow are quite happy. Unfortunately, the flexibility offered by those companies pursuing a deal can significantly increase risk due to the complexity of actually managing the alliance once launched. Risk and complexity are the enemies of value. Certainly, deals should be innovative and flexible; however, innovation and flexibility in a deal should not create such operational risk and complexity that it becomes impossible to realize the value intended.

Flexibility vs. the Cost of Time Our research study of over 50 potential biopharma partners, conducted for a major pharmaceutical company, found that, for licensors, the most important criterion is Quarter 2, 2011

the licensee’s commitment to expeditiously develop their asset and get it to market. The second most desirable characteristic is the licensor’s willingness to cede participation and decision making rights, usually described as “being

Governance committees need the actual authority to make the decisions embodied in their role as envisioned in the agreement. If committee members regularly have to “get back to you” after consulting superiors and other stakeholders, the partner may begin to think that decisions are made behind closed doors and not collaboratively. It also likely adds to the number of times that decisions are reconsidered for no apparent reason. 13