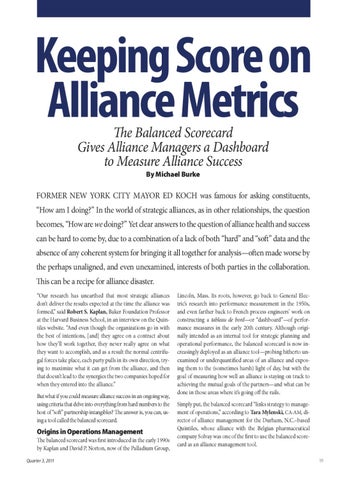 Former New York City mayor Ed Koch was famous for asking constituents, “How am I doing?” In the world of strategic alliances, as in other relationships, the question becomes, “How are we doing?” Yet clear answers to the question of alliance health and success can be hard to come by, due to a combination of a lack of both “hard” and “soft” data and the absence of any coherent system for bringing it all together for analysis—often made worse by the perhaps unaligned, and even unexamined, interests of both parties in the collaboration. This can be a recipe for alliance disaster. “Our research has unearthed that most strategic alliances don’t deliver the results expected at the time the alliance was formed,” said Robert S. Kaplan, Baker Foundation Professor at the Harvard Business School, in an interview on the Quintiles website. “And even though the organizations go in with the best of intentions, [and] they agree on a contract about how they’ll work together, they never really agree on what they want to accomplish, and as a result the normal centrifugal forces take place, each party pulls in its own direction, trying to maximize what it can get from the alliance, and then that doesn’t lead to the synergies the two companies hoped for when they entered into the alliance.” But what if you could measure alliance success in an ongoing way, using criteria that delve into everything from hard numbers to the host of “soft” partnership intangibles? The answer is, you can, using a tool called the balanced scorecard.

Origins in Operations Management The balanced scorecard was first introduced in the early 1990s by Kaplan and David P. Norton, now of the Palladium Group, Quarter 3, 2011

Lincoln, Mass. Its roots, however, go back to General Electric’s research into performance measurement in the 1950s, and even farther back to French process engineers’ work on constructing a tableau de bord—or “dashboard”—of performance measures in the early 20th century. Although originally intended as an internal tool for strategic planning and operational performance, the balanced scorecard is now increasingly deployed as an alliance tool—probing hitherto unexamined or underquantified areas of an alliance and exposing them to the (sometimes harsh) light of day, but with the goal of measuring how well an alliance is staying on track to achieving the mutual goals of the partners—and what can be done in those areas where it’s going off the rails. Simply put, the balanced scorecard “links strategy to management of operations,” according to Tara Mylenski, CA-AM, director of alliance management for the Durham, N.C.–based Quintiles, whose alliance with the Belgian pharmaceutical company Solvay was one of the first to use the balanced scorecard as an alliance management tool. 19