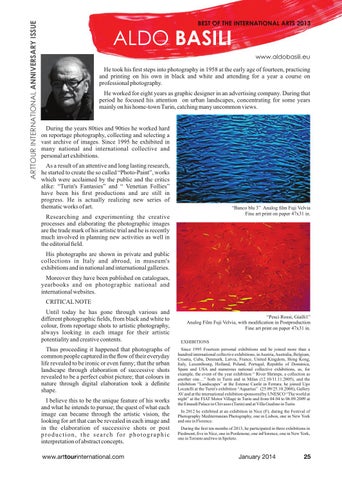 BEST OF THE INTERNATIONAL ARTS 2013

ALDO BASILI www.aldobasili.eu He took his ﬁrst steps into photography in 1958 at the early age of fourteen, practicing and printing on his own in black and white and attending for a year a course on professional photography. He worked for eight years as graphic designer in an advertising company. During that period he focused his attention on urban landscapes, concentrating for some years mainly on his home-town Turin, catching many uncommon views.

During the years 80ties and 90ties he worked hard on reportage photography, collecting and selecting a vast archive of images. Since 1995 he exhibited in many national and international collective and personal art exhibitions. As a result of an attentive and long lasting research, he started to create the so called “Photo-Paint”, works which were acclaimed by the public and the critics alike: “Turin's Fantasies” and “ Venetian Follies” have been his ﬁrst productions and are still in progress. He is actually realizing new series of thematic works of art.

Researching and experimenting the creative processes and elaborating the photographic images are the trade mark of his artistic trial and he is recently much involved in planning new activities as well in the editorial ﬁeld. His photographs are shown in private and public collections in Italy and abroad, in museum's exhibitions and in national and international galleries. Moreover they have been published on catalogues, yearbooks and on photographic national and international websites. CRITICAL NOTE Until today he has gone through various and different photographic ﬁelds, from black and white to colour, from reportage shots to artistic photography, always looking in each image for their artistic potentiality and creative contents. Thus proceeding it happened that photographs of common people captured in the ﬂow of their everyday life revealed to be ironic or even funny; that the urban landscape through elaboration of successive shots revealed to be a perfect cubist picture; that colours in nature through digital elaboration took a deﬁnite shape. I believe this to be the unique feature of his works and what he intends to pursue; the quest of what each image can became through the artistic vision, the looking for art that can be revealed in each image and in the elaboration of successive shots or post production, the search for photographic interpretation of abstract concepts. www.arttourinternational.com

“Pesci Rossi, Gialli1” Analog Film Fuji Velvia, with modiﬁcation in Postproduction Fine art print on paper 47x31 in. EXHIBITIONS Since 1995 Fourteen personal exhibitions and he joined more than a hundred international collective exhibitions, in Austria, Australia, Belgium, Croatia, Cuba, Denmark, Latvia, France, United Kingdom, Hong Kong, Italy, Luxembourg, Holland, Poland, Portugal, Republic of Dominica, Spain and USA and numerous national collective exhibitions, as, for example, the event of the year exhibition “ River Shrimps, a collection as another one…” both in Turin and in Milan (12.10/11.11.2005), and the exhibition “Landscapes” at the Estense Castle in Ferrara; he joined Ugo Locatelli at the Turin's exhibition “Aquarius” (25.09/25.10.2008), Gallery AV and at the international exhibition sponsored by UNESCO “The world at night” at the FIAT Motor Village in Turin and from 04.04 to 06.09.2009 at the Einaudi Palace in Chivasso (Turin) and at Villa Gualino in Turin. In 2012 he exhibited at an exhibition in Nice (F), during the Festival of Photography Mediterranean Photography, one in Lisbon, one in New York and one in Florence. During the ﬁrst ten months of 2013, he participated in three exhibitions in Piedmont, ﬁve in Nice, one in Pordenone, one inFlorence, one in New York, one in Toronto and two in Spoleto. 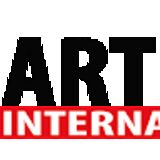