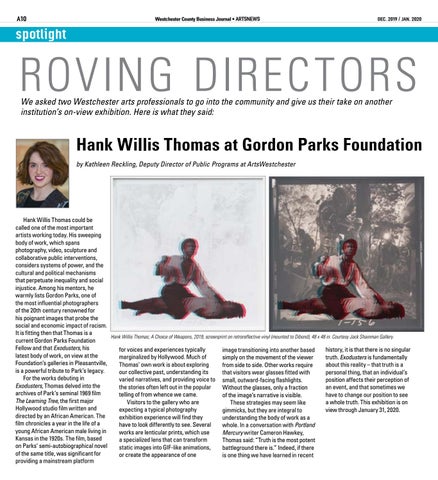 ROVING DIRECTORS We asked two Westchester arts professionals to go into the community and give us their take on another institution’s on-view exhibition. Here is what they said:

Hank Willis Thomas could be called one of the most important artists working today. His sweeping body of work, which spans photography, video, sculpture and collaborative public interventions, considers systems of power, and the cultural and political mechanisms that perpetuate inequality and social injustice. Among his mentors, he warmly lists Gordon Parks, one of the most influential photographers of the 20th century renowned for his poignant images that probe the social and economic impact of racism. It is fitting then that Thomas is a Hank Willis Thomas; A Choice of Weapons, 2019, screenprint on retroreflective vinyl (mounted to Dibond), 48 x 48 in. Courtesy Jack Shainman Gallery. current Gordon Parks Foundation Fellow and that Exodusters, his for voices and experiences typically history, it is that there is no singular image transitioning into another based latest body of work, on view at the marginalized by Hollywood. Much of truth. Exodusters is fundamentally simply on the movement of the viewer Foundation’s galleries in Pleasantville, Thomas’ own work is about exploring about this reality – that truth is a from side to side. Other works require is a powerful tribute to Park’s legacy. our collective past, understanding its personal thing, that an individual’s that visitors wear glasses fitted with For the works debuting in varied narratives, and providing voice to small, outward-facing flashlights. position affects their perception of Exodusters, Thomas delved into the the stories often left out in the popular an event, and that sometimes we Without the glasses, only a fraction archives of Park’s seminal 1969 film telling of from whence we came. have to change our position to see of the image’s narrative is visible. The Learning Tree, the first major Visitors to the gallery who are a whole truth. This exhibition is on These strategies may seem like Hollywood studio film written and expecting a typical photography view through January 31, 2020. gimmicks, but they are integral to directed by an African American. The exhibition experience will find they understanding the body of work as a film chronicles a year in the life of a have to look differently to see. Several whole. In a conversation with Portland young African American male living in works are lenticular prints, which use Mercury writer Cameron Hawkey, Kansas in the 1920s. The film, based a specialized lens that can transform Thomas said: “Truth is the most potent on Parks’ semi-autobiographical novel static images into GIF-like animations, battleground there is.” Indeed, if there of the same title, was significant for or create the appearance of one is one thing we have learned in recent providing a mainstream platform 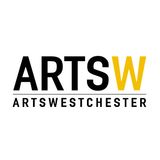