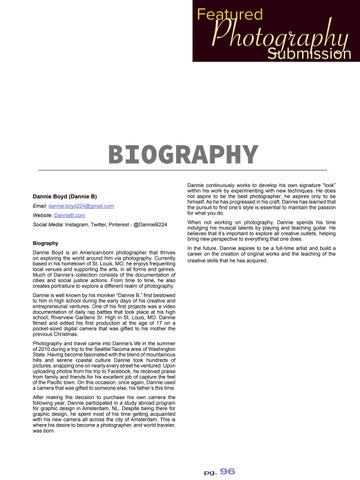 BIOGRAPHY Dannie Boyd (Dannie B) Email: dannie.boyd224@gmail.com Website: DannieB.com Social Media: Instagram, Twitter, Pinterest - @DannieB224 Biography Dannie Boyd is an American-born photographer that thrives on exploring the world around him via photography. Currently based in his hometown of St. Louis, MO, he enjoys frequenting local venues and supporting the arts, in all forms and genres. Much of Dannie’s collection consists of the documentation of cities and social justice actions. From time to time, he also creates portraiture to explore a different realm of photography.

Dannie continuously works to develop his own signature “look” within his work by experimenting with new techniques. He does not aspire to be the best photographer; he aspires only to be himself. As he has progressed in his craft, Dannie has learned that the pursuit to find one’s style is essential to maintain the passion for what you do. When not working on photography, Dannie spends his time indulging his musical talents by playing and teaching guitar. He believes that it’s important to explore all creative outlets, helping bring new perspective to everything that one does. In the future, Dannie aspires to be a full-time artist and build a career on the creation of original works and the teaching of the creative skills that he has acquired.

Dannie is well known by his moniker “Dannie B,” first bestowed to him in high school during the early days of his creative and entrepreneurial ventures. One of his first projects was a video documentation of daily rap battles that took place at his high school; Riverview Gardens Sr. High in St. Louis, MO. Dannie filmed and edited his first production at the age of 17 on a pocket-sized digital camera that was gifted to his mother the previous Christmas. Photography and travel came into Dannie’s life in the summer of 2010 during a trip to the Seattle/Tacoma area of Washington State. Having become fascinated with the blend of mountainous hills and serene coastal culture Dannie took hundreds of pictures, snapping one on nearly every street he ventured. Upon uploading photos from his trip to Facebook, he received praise from family and friends for his excellent job of capture the feel of the Pacific town. On this occasion, once again, Dannie used a camera that was gifted to someone else, his father’s this time. After making the decision to purchase his own camera the following year, Dannie participated in a study abroad program for graphic design in Amsterdam, NL. Despite being there for graphic design, he spent most of his time getting acquainted with his new camera all across the city of Amsterdam. This is where his desire to become a photographer, and world traveler, was born. 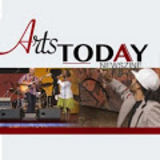 Take a look inside!

Take a look inside!