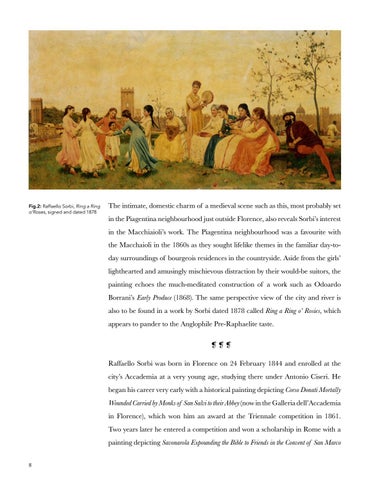 The intimate, domestic charm of a medieval scene such as this, most probably set in the Piagentina neighbourhood just outside Florence, also reveals Sorbi’s interest in the Macchiaioli’s work. The Piagentina neighbourhood was a favourite with the Macchaioli in the 1860s as they sought lifelike themes in the familiar day-today surroundings of bourgeois residences in the countryside. Aside from the girls’ lighthearted and amusingly mischievous distraction by their would-be suitors, the painting echoes the much-meditated construction of a work such as Odoardo Borrani’s Early Produce (1868). The same perspective view of the city and river is also to be found in a work by Sorbi dated 1878 called Ring a Ring o’ Rosies, which appears to pander to the Anglophile Pre-Raphaelite taste. ❡❡❡ Raffaello Sorbi was born in Florence on 24 February 1844 and enrolled at the city’s Accademia at a very young age, studying there under Antonio Ciseri. He began his career very early with a historical painting depicting Corso Donati Mortally Wounded Carried by Monks of San Salvi to their Abbey (now in the Galleria dell’Accademia in Florence), which won him an award at the Triennale competition in 1861. Two years later he entered a competition and won a scholarship in Rome with a painting depicting Savonarola Expounding the Bible to Friends in the Convent of San Marco