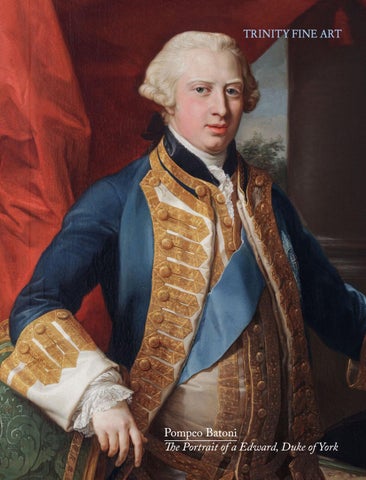 Pompeo Batoni The Portrait of a Edward, Duke of York 1

dward Augustus, Duke of York, the brother of King George III, was the first member of the English royal family to travel to Italy as a Grand Tourist. While in Rome between 15 and 28 April 1764, the

Duke sat for Pompeo Batoni, Italy’s finest portrait painter, who enjoyed the patronage of Rome’s most distinguished foreign visitors. This portrait is one of several signed versions, each of magnificent quality, including two in the Royal Collection (figs. 1,2), which show minor variations in the outlines of the lace at the sitter’s throat and wrists, and another formerly in the collection of Earl Howe at Penn House, Buckinghamshire, now in an American private collection (fig. 3)1. The number of autograph versions is testament to the

portrait’s contemporary popularity and many of the autograph replicas were commissioned by the sitter himself to be sent to friends. The Englishman James Martin (1738-1810), who kept a diary during the course of his own Grand Tour, visited Batoni’s studio on various occasions. In an entry dated 20

July 1764 he mentions “Went to Pompeia Batoni’s saw there several portraits. He has made a copy from that of the Duke of Yorke & rec’d orders for One or Two more. 2” The painting now at Windsor Castle, for example, was given by the Duke to James Duff, 2nd Earl of Fife and the Penn House version was given directly to Richard, Earl Howe. The canvas generally considered to be the prime, now at Buckingham Palace (fig. 1), was given to Sir Horace Mann,

who later presented it to the Duke’s brother, King George III3.

While the Duke’s visit to Italy was not politically motivated, it came shortly

after the end of the Seven Years War and elicited great interest. Many prominent members of Roman society were keen to ingratiate themselves with the new Hanoverian ruling family. In a vain attempt to elude attention, the Duke of York travelled to Italy incognito as the “Earl of Ulster”, but from the time of his

his trip was documented in regular newspaper accounts, both in Italy and at home. His sitting with Batoni may have been organized by Richard Dalton who was librarian to King George III. Dalton travelled regularly to Italy to purchase works of art on behalf of the King and, given his knowledge of the

country, would have also played a key role in the coordination of the Duke’s tour.4 Edward Augustus, Duke of York, is shown in three-quarter-length, in the undress uniform of a flag officer, wearing the sash of the Order of the Garter. His right forearm rests on a chair and with his left hand he indicates the Colosseum, visible in the background. On the table behind him lie his

hat and sword. Batoni would have had a variety of backdrops for his sitters to choose from; the Duke opted to be depicted before one of Rome’s most recognizable monuments, the Colosseum. Cardinal Albani implored the Duke to visit Rome during his Italian sojourn and entertained him at the Villa Albani outside Porta Salaria. The Cardinal

also arranged for the British painter and antiquary Thomas Jenkins to act as the Duke’s guide, or cicerone, for the duration of his trip while the art historian and

archeologist Johann Joachim Winkelmann was tasked with advising him on the purchase of art. 5 The Duke’s attention, however, appears to have been focused less on Italy’s rich historical and artistic offerings and more on its promise of diversion. The Duke’s reputation as a philanderer and libertine became fodder for the newspapers who relished in reporting each alleged conquest. Less than

impressed by the Duke’s exploits, Winkelmann described him as “the greatest princely beast that I know, [who] does no honour to his rank and nation.6” Winkelmann was not alone in his contempt for the Duke, as Ilaria Bignamini writes, “no eighteenth-century Grand Tourist had a worst reputation than the

Duke of York both at home and abroad.7” Horace Walpole’s account of him in a letter to Horace Mann was scathing to say the least: “a milk-white angel, 7

white even to his eyes and eyelashes, very purblind and whose tongue runs like a fiddlestick. (…) York seems a title fated to sit on silly heads – or don’t let us talk of him; he is not worth it. 8” It is worth noting, however, that Walpole’s view of the Duke was likely tainted, as the royal is said to have “stolen a lady” from him. 9 Whether or not personal retribution was a factor, Walpole certainly did everything in his power to discredit the Duke of York, propagating the opinion that his tour of Italy reflected the king’s desire to distance his freethinking brother from the British political arena. 10 Despite his reputation, the Duke of York was well received in Rome and was showered with gifts from the Pope. The Duke resolved to return to Italy three years later, according to Walpole, “intending to visit a lady at Genoa, with whom he was in love. 11” He stopped in the South of France where he was taken ill and died shortly after in Monaco, on 17 September 1767. ❡❡❡ Among Italy’s painters of the eighteenth

Batoni was held in exceptionally high esteem during his lifetime. Although he is perhaps best remembered for his portraits of international travellers, especially the British, who visited Rome on the Grand Tour, he was much more than a “face-painter.” The roster of patrons who clamoured for his paintings of classical and mythological subjects and scenes from the Old and New Testaments is studded with emperors and kings, popes and princes.

However, a large part of Batoni’s enormous artistic output did clearly consist in portraits. In 1744 he painted a portrait of Joseph Leeson (Dublin, National Gallery), the first portrait of an Irish nobleman passing through Rome. This was followed by a large number of portraits of English gentlemen, for whom

Batoni developed a new style of portrait involving the sitter posing before ancient ruins or Classical statuary, or against the evocative backdrop of the Roman countryside, vying in terms of the lofty dignity of his pose with that of the Classical statuary itself, a fitting tribute to the fashion for archaeological

excavation and at the same time an intellectually pleasing memento, for the sitter, of his grand tour to Rome. The restfully pleasing side of Batoni’s painting, however, conceals a dialogue with the learned, literary trend that closely mirrored the new cultural climate

of the years immediately following the middle of the century. Alongside Winckelmann, Mengs, who visited Rome for the first time in 1741, wanted the imitation of Classical art to be matched by imitation of the art of Correggio 9

and of Raphael. And finally, Jean-Louis David came to Rome in 1775 as a resident fellow of the Académie de France, and it was with him that

defined in a thoroughly sculptural, proud depiction of the ancient Romans’ civic virtues. Yet while Batoni was Mengs’ friend, and

world, he cannot be termed a Neoclassical painter. Boni realised this when he wrote in his Eulogy of Batoni, by now an artist of renown, that he was made a painter “by nature”, unlike Mengs who was “made a painter by philosophy”, in other words through study. What Boni was attempting to convey was the idea that Batoni was a painter of instinct, a spontaneous assimilator. Though linked to the classicising tradition, his painting nevertheless adopts the most varied and independent individual nuances, at times imbued with the verve of the century, at others devoting greater attention to draughtsmanship and to the distribution of his composition. Batoni died in Rome on 4 February 1787.

Trinity Fine Art: Pompeo Batoni - The Portrait of a Edward, Duke of York

Trinity Fine Art: Pompeo Batoni - The Portrait of a Edward, Duke of York