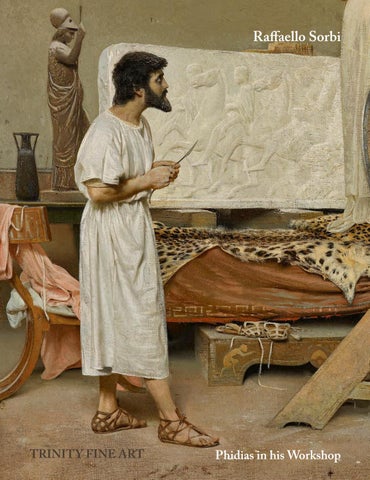 Phidias in his Workshop 1869

his painting was commissioned from Sorbi by Giovanni Duprè (fig. 1), who had been thunderstruck by the

Elgin Marbles in the British Museum and decided to visit the young Tuscan painter in person in order to commission a picture from him portraying Phidias in his workshop carving the statue of Minerva, with a part of the Parthenon frieze in the background. To quote Quatremère de Quincy: «These figures [the Parthenon sculptures] were not carved in situ but in the workshop; moreover, before they were taken to their final Fig.1: Antonio Ciseri, Portrait of Giovanni Duprè, oil on canvas, Florence, Galleria d’arte Moderna, Palazzo Pitti

destination, they were shown to the public who could thus review their myriad aspects.1». It was probably this very quote that inspired Sorbi’s painting. And we can also see how the sculptor’s workshop might be a subject with which Duprè felt a special affinity, personally identifying with the figure of Phidias.

Addressing this subject, which had drawn the attention of many of his contemporaries, Camillo Boito wrote: «What a splendid subject, and tailor-made for the man who devised it, namely Giovanni Duprè: Phidias in his workroom

looking intensely at the still unfinished figure of Minerva, and by her side a model posing as the goddess, naked from the waist up. Artifice, art, nature,2». Discussing Sorbi, Boito wrote «for some time now, with Goupil, a very powerful dealer in modern French paintings, so insistently asking for his work, in working all day and only for the said Goupil, he cannot keep up with the latter’s demands, nor does the universal market ever tire of his workshop. On lovingly completing a work, after happily showing it to a few curious or simply idle artist friends who knock on the door of his room, he packs it in a box and ships it off to Paris. There, admired and much desired, it falls into the hands of some Englishman, some Russian or some American who bedecks his private gallery with it, proudly displaying the masterpiece of this famous Italian artist unknown in Italy. Today, in the splendour of his virtually Europe-wide glory, he is starting to become unknown even in Florence. He is a good-looking youngster, healthy, lively, happy and sporting a goatee, his eyes gleaming, his speech forthright and exuberant in the true Tuscan manner. Twelve years ago, when he was virtually no more than a lad, the Florentines held him for a prodigy: older teachers were tempted to snap their paintbrushes in two, and the public was of a sudden truly enamoured of him3». That is Boito’s description of how young Sorbi’s career was spangled with success. Sorbi’s first work, a historical painting entitled Corso Donati Mortally Wounded Is Carried by Monks of

San Salvi to their Abbey (now in the Galleria dell’Accademia in Florence), won an award at the Triennale competition in 1861 and his reputation reached the ears of Goupil, who proceeded to sell his works throughout Europe.

Describing the artist’s studio, Boito hints at an environment bearing a close resemblance to the workshop depicted in the painting: “This painter’s small room is almost bare. On the dirty white walls there hang a few small studies, a few sketches, a handful of photographs; there is not a single abandoned canvas, not a single unsold painting, not a single frame awaiting a new destination. In the middle of the room there stands an easel, in a corner a wooden model but none

of those contraptions of which artists are so fond. There is all the parsimonious simplicity of the Florentine. At first sight it looks like the room of a youngster just out of school who has never achieved anything, who is clumsy and poor. The fact is that Sorbi (Raffaele Sorbi for those unfamiliar with his Christian name) has no time to work for himself, he has no time to think of himself. Everything that is done by his hand is swept out of the room as soon as he signs it; and he works fast, fast and well, and once he starts on a picture he is never distracted: he finishes it. Thus you can never see anything in his room. Nulla dies sine linea, but neither is a single stroke wasted4».

Fig.3: Detail of the frieze from the Parthenon reproduced in the painting. London, British Museum

Raffaello Sorbi was born in Florence on 24 February 1844 and enrolled at the city’s Accademia at a very young age, studying there under Antonio Ciseri. He began his career very early with a historical painting depicting Corso Donati Mortally Wounded Is Carried by Monks of San Salvi to their Abbey (now in the Galleria dell’Accademia in Florence), which won him an award at the Triennale competition in 1861. Two years later he entered a competition and won a scholarship in 5

Rome with a painting depicting Savonarola Explaining the Bible to Some Friends in the Convent of San Marco but he chose to forgo both the prize and the stay in Rome, preferring to remain in his native city, which he only left on very few occasions in the course of his long and fruitful life. In fact many of his paintings are on Florentine themes, for example depicting Piccarda Donati Kidnapped from the Convent of Santa Chiara by her Brother Corso, commissioned from him by King Victor Emmanuel Il; Pietro Leopoldo I’s Courier, commissioned by Victor Emmanuel III; Leopold I in the Florentine Countyside Followed by His Guard of Honour, now in the Galleria d’Arte Moderna in Florence; and other genre scenes such as A Regatta on the Arno, The Merry-Go-Round, The Decameron, The Florentine Concert, The Songs of May and Dante’s Convalescence. In all of them he displays a

Figs.4-5: Comparison between the transmitted light reflectography and the painting

Fig.6 (opposite page): Transmitted light reflectography of the painting

remarkable respect for history and meticulously resconstructs his settings. In 1869 Sorbi was honoured with a visit from Giovanni Duprè, who commissioned him to paint Phidias in his Workshop, Carving the Statue of Minerva for the Parthenon. Sorbi produced a large number of paintings for the renowned Paris art dealer Goupil. His paintings include: Working in the Fields, owned by the Provincia di Firenze; Roman Idyll, shown in Florence in 1903; The Hunter; Part of a Wood; Sulla Moscia and The Plougman, shown at the 80th National Exhibition in Palazzo Pitti in 1927; St. Catherine of Siena Before an Angry Florentine Mob After Concluding Peace with the Pope, commissioned from him by the Marchese Carlo Torrigiani;

and Imelda Lambertazzi and Bonifazio Geremei, sold to Wilhelm Metzler of Frankfurt. Much of his work is in private collections in Italy and in the United States, many of his paintings being owned by the Budini Gattai family of Florence. Sorbì held numerous posts in the course of his career and was a member of several artistic acadamies and sodalities. He died in Florence on 19 December 1931. ❡❡❡

Figs.7-8: Comparison between the transmitted light reflectography and the painting

A reflectographic inspection conducted with transmitted light (fig. 6) reveals the changes made by the artist while painting the picture. A part of the frieze, now visible in its entirety, was originally covered by a cloth draped over it, and the horsemen were painted back-to-front compared to the original carved frieze in the British Museum (figs. 4-5). The model was originally set lower down, only being raised at a later stage in

the creative process to impart a more slender elegance to her figure, and she was probably portrayed in profile like the statue of Minerva (figs. 7-8). The bow of the sculptor’s head was also a little more pronounced, and there was a wider gap between Minerva’s arm and her body (a correction which can even be seen with the naked eye). And finally, Minerva’s helmet only came down to her forehead, its point protruding a little less.

Raffaello Sorbi: Phidias in his Workshop

Raffaello Sorbi: Phidias in his Workshop