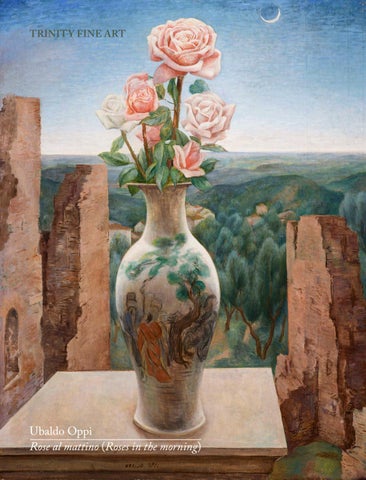 Executed in 1929, this extraordinary painting by Ubaldo Oppi is an example of an extremely rare genre amongst his body of work which takes a still life scene as its subject The first rendering of this type was painted in 1919 and had the same title, Rose al mattino, but was executed in an earlier painting style which he was using at the time, adopted due to his close study of the works of the 15th and 16th centuries through repeated visits to the Louvre during the years when he lived in Paris. In the present more mature version, he expresses all of the more developed pictoral and compositional energy which had been maturing since 1922 when he participated in the lively “Sette di Novecento” group which, although he only joined it for a few months, radically changed his way of painting allowing it to reach unparalleled levels of quality and refinement.

This rare and engaging work can almost be defined as surrealist, in which the artist has accentuated the elegance of the finely decorated Chinese porcelain vase from which explodes a bunch of beautiful full petalled roses, all of which is presented against the backdrop of an invented landscape in which some imaginary medieval ruins, the dawn light and a crescent moon illuminate the painting imbuing it with a magic, romantic atmosphere.

The 1930s were the years of his extensive fresco cycle in Padua and of his return after a long period of wandering, to live in the

Veneto, his adopted land in which he finally found peace in his last few years. â?Ąâ?Ąâ?Ą As is noted by Elena Pontiggia1, the theme of the vase in the

foreground on a windowsill had been executed before by Oppi,

not only in the homonymous Rose al mattino of 1919, but also in La fabrique au dimanche, also from 1919. In this example the composition remains prevelently graphic and linear, whereas by comparison the present still life from ten years later has form and volume. The roses are no longer drawn, but are changed into an investigation of the fleshy forms of the petals and the vase acquires weight and a three-dimensionality accentuated by its fine decoration. Moreover the background is no longer simplified

but is used by the artist to indulge in the details of the thick vegetation and the neo-romantic elements such as the moon and the crumbling wall. â&#x20AC;&#x153;In this work the fragile present moment (To which the roses allude with their all too brief splendour) is put in contrast to the historical past, symbolised by the ruins. In fact the whole image is suffused with a sense of rebirth, of a flowering

amongst or in the aftermath of the ruins2â&#x20AC;?.

From infrared tests, other than showing the underdrawing in pencil and charcoal, it is also possible to see the variations of the composition carried out whilst the work was being painted. On the left hand side the countryside was delineated in minute detail, with roads, houses, doors and windows which were later substituted by the crumbling ruins, with the houses being relegated to being covered by a distant landscape. This same town was also present on the other side and similarly executed in minute detail. In the final composition all the realist rendering of the town

was eliminated in order to leave the vase of roses suspended in a dreamlike atmosphere, immersed in a landscape which has lost the village which only shows up in the underdrawing. It is interesting to consider that in the work from 1919, the realistic village is present in the background of the still life, which illustrates the change in composition and point of view in the increasingly lyrical and poetic landscapes of Oppi, during the intervening years between the two paintings.