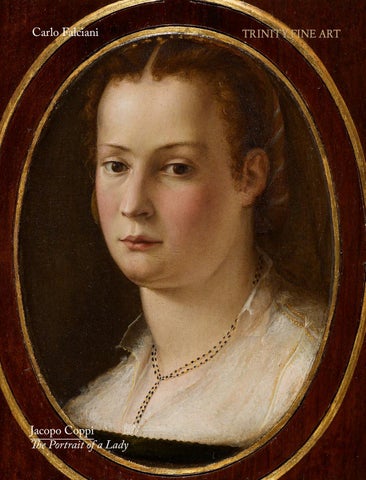 Jacopo Coppi The Portrait of a Lady 1

The difficulty in attributing the portaiture produced by the painters who worked in Francesco I’s Studiolo is one of the issues that continues to present problems in our understanding of this major and multi-faceted moment in Florentine painting in the second half of the 16th century. No cohesive, complete study has yet been conducted to help us put order in a complex and many-sided genre that is dispersed among private collections even more than it is to be found in museums, which does not help in allowing us to inspect the works directly. While in-depth studies have been conducted in connection with Fig.1: Jacopo Coppi, Self Portrait, engraving after the painting in the Uffizi, Florence

Allori, Macchietti and Cavalori, allowing us to set certain fixed boundary markers also in connection with their portraiture, much still remains to be done for most of the other artists who worked on the Studiolo, for many of whom we have only very few portraits – or even none at all – today and those that we do have, while unquestionably by a given artist’s hand, are difficult to compare with that artist’s religious paintings. The most striking example is the

case of Francesco Morandini, called Il Poppi, for whom we have paintings of the highest quality, such as his Portrait of Antonio di Vincenzo de’ Ricci in the Museo di Casa Martelli in Florence, initialled with Poppi’s own monogram, but only a handful of other free-standing portraits. Or Naldini, for whom we do not have a single signed portrait. Much work has been done on Carlo Portelli by the curators of a recent exhibition at the Galleria dell’Accademia in Florence1, although the attribution of several of the works on display requires reconsidering. A great deal of work, on the other hand, remains to be done around the corpus of Jacopo Coppi, the restless and always powerful painter to whom we suggest attributing this exquisite and precious portrait of a lady painted like a cameo in a carved panel in order quite clearly to find its place in the boiseries of a studiolo. Only one scholarly work has been devoted to this artist’s portraiture, focusing on his self-portraits in altarpieces, in which the author discusses four free-standing paintings: the Self-portrait in the Uffizi, the Portrait of Niccolò Barberini, a Portrait of Niccolò Machiavelli, and a Portrait of Francesco I de’ Medici, all of which can easily be compared with the features of many of the male heads in his altarpieces2. In two of the artist’s most important religious paintings we find portraits of figures associated with the commission or a self-portrait easily identifiable by comparing the

figure’s features with those of Coppi’s Self-portrait in the Uffizi.

Coppi painted a multitude of male heads with markedly individual features (a high forehead, a pointed nose, slanted eyes or claw-like hands inspired by Miracle of the Crucifix of Beirut for the church of San Salvatore in Bologna, and these features may serve as a guide in identifying the artist’s free-standing

portraiture. The same cannot be said, however, with regard to his female faces See A. Nesi, Contributi alla Cronologia e alla Ritrattistica di Jacopo Coppi, in «Arte Cristiana», 812, 2002, pp. 341.

which, aside from perhaps one exception, almost never appear to be portraits in his altarpieces. Whether young or old, almost all of his women seem to possess generic features that do not always help us in this task. Yet defining the features of Coppi’s style and pointing to the specific draughtsman’s ploys and devices that he uses also in these imaginary faces may help us to add the

portrait of the lady under discussion here to the corpus of his work. Following a new proposal to identify Coppi’s place and date of birth as Florence in 1546 rather than Peretola in 15233, it has become easier to clarify the artist’s career. While still a very young man, he worked with Michele Tosini on the apparatus for the wedding of Francesco I de’ Medici and Joanna of Austria in 1565, but he had in fact made his artistic debut two years earlier when he joined

Francesco Traballesi in painting a pallbearers’ stretcher for the Compagnia dell’Arcangelo Raffaele, of which he was a member . The two paintings which 4

he contributed to Francesco I’s studiolo – Darius’ Family Before Alexander

the Great and The Invention of Gunpowder – allowed him to make a name for himself on the Florentine art scene. Within a short time, the young artist had been commissioned to paint three

altarpieces for three Florentine churches, showing that he must still have enjoyed Giorgio Vasari’s support, probably on account of their shared formal

leanings. Jacopo Coppi painted a Pentecost for the Pieri altar in the church of San Niccolò Oltrarno in around 1572; a Sermon of St. Vincent Ferrer for the Attavanti altar in Santa Maria Novella in 1574; and the Ecce Homo for the Zati altar in Santa Croce two years later. In the group of paintings listed above, 7

however, it is difficult to discern the sum of stylistic referents that inform this

small but intense portrait of a lady. The artist’s mixed and polished style clearly betrays the influence of Andrea del Sarto – the undisputed master of the entire generation of artists working in Florence in the second half of the 16th century – but there has been grafted

of Rosso Fiorentino who was also a model for Giorgio Vasari. Few of the painters working in the Studiolo chose to emulate Rosso Fiorentino’s tough, sharp manner, the most striking and easily visible instance of which in Florence was the Marriage of the Virgin in the church of San Lorenzo. It is common knowledge that Rosso had never been a Medici artist, possibly on account of

his preference for a patronage more in tune with the preaching of Savonarola, and his influence in Florence was very limited. Aside from Giorgio Vasari, who met Rosso in Arezzo in his youth, the only artists who looked to his style were Carlo Portelli, Maso da San Friano to a certain extent, and Jacopo Coppi. Of these, Coppi was the artist who drew closest to the style of Rosso in the Florence of Cosimo I, and constant deviations in his compositions together with the sharp, almost cutting edges of his drapery and his human bodies, with his crowded compositions with their overlapping figures so clearly visible in works such as the Ecce Homo in Santa Croce are all features that we can lay at Rosso’s door. But these features are also to be found in the highly personalised faces and sharp profiles of eye and nose with cold and cutting highlights underscoring their expressiveness, and they are to be found also in this elegant portrait of a lady probably painted after the panels for the Studiolo in 1572 but before the Santa Croce altarpiece in 1576. In the panel depicting Darius’ Family Before Alexander the Great (fig. 2) we can already find a female face that can stand comparison with the formal features of the woman portrayed in this walnut panel. While almost all of the women in Darius’ family have sharp profiles with straight, pointed noses, the woman closest to Alexander’s mount has a face in which the resemblance with the portrait under discussion here is quite striking: the high forehead over an almost aquiline nose, the clean, arched eyebrows over sharp eyes, and the small, well-formed mouth, are very close not so much to the physiognomy itself as to the characteristic of the painterly style that the artist has employed in portraying the woman’s physiognomy in this panel. Even closer comparison may be made with another two female heads, in the Sermon of St. Vincent Ferrer and the Ecce Homo respectively. On the right-hand side of the Ferrer altarpiece (fig. 3), painted two years after the Studiolo, Coppi has added two female figures (one of which could well be a portrait) that have clear similarities with the face of the woman portrayed here. In fact, the shape of the forehead, the ratio of the nose to the arched eyebrows and the shape of the small, well-defined mouth may almost be superimposed. While yet closer comparison may be made with 9

a female head (probably the only female portrait that Coppi ever built into an altarpiece) painted in the bottom left-hand corner of the Ecce Homo in Santa Croce. The woman depicted in a three-quarter pose at Christ’s feet has almost identical physiognomic and formal features to those of the lady in the portrait under examination (fig. 4), apart from her slightly less full and chubby cheeks. Once again, we find the same forehead and the same almost aquiline nose, as pointed as the arched eyebrows; indeed, the persistent similarities are so striking as to encourage us to confirm our attribution of this elegant portrait to the hand of Jacopo Coppi. ❡❡❡

Finding a name for the sitter, on the other hand, is a more difficult task, because there is no collection inventory or heraldic mark to help us in our endeavour to identify her. It is only on the basis of resemblance – a slippery yet attractive terrain – that we may point to the similarity between this panel and the Portrait of Caterina Soderini Ginori (fig. 5), in Palazzo Ginori, which Federico Zeri attributed to Girolamo Macchietti (Fototeca Zeri card no35410) but which Philippe Costamagna has rightly restored to Carlo Portelli. Despite the fact that the two portraits share a common source of stylistic inspiration in Rosso Fiorentino, they do not appear to be by the same hand because Portelli’s stylistic quirks are fairly evident in the picture in the Ginori collection while they are totally absent from the portrait under discussion here. Having said that, a physiognomic closeness might well constitute a first attempt to rediscover a trace of the woman who looks out at us from this small oval portrait by Jacopo Coppi with such an intense and expressive gaze.

Trinity Fine Art: Jacopo Coppi - The Portrait of a Lady

Trinity Fine Art: Jacopo Coppi - The Portrait of a Lady