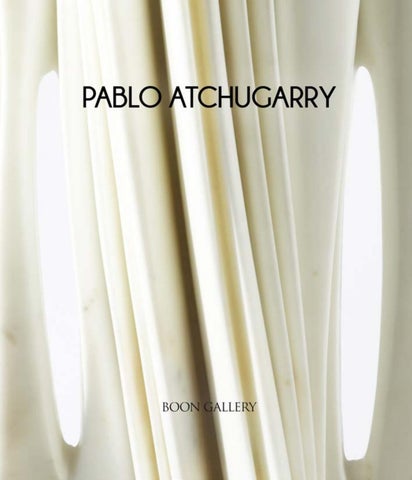 The block of marble extracted from the quarry is a page waiting to be written, a mystery to be repeated every time the sculptor holds his chisel over the stone. The surface welcomes the surprise of a gesture that goes beyond thought. Pablo Atchugarry is well aware of this, as was Lucio Fontana when he experimented with the perceptual darkness that opened up beyond the cuts he inflicted on the canvas, not as a desecration but as a promise of new spaces, of new creative solutions. Fontana stated in his “Manifesto Blanco”, published in Buenos Aires in 1946, that “an art based on forms created by the subconscious and balanced by reason constitutes a true expression of existence and is the synthesis of a moment in time”. Some time later, he would create “spatialism” and put these convictions into practice. Both Fontana and Atchugarry were born in Latin America: the former in Rosario in Santa Fe and the latter in Montevideo. Both their artistic journeys began with figuration; their shared change of direction towards non-figuration maturing when they arrived in Italy. If Fontana, with his revolutionary and provocative approach, met the third dimension by crossing the threshold that had previously been protected by mystery and the risk of what lay beyond, for Atchugarry it was a question of penetrating to the heart of a mystery that was not deliberately planned. In fact, unlike many sculptors, he does not rely on a drawing on paper: the block of marble, even when it is monumental in size, welcomes rapid outlines in charcoal, so as to indicate a starting point, a place where the chisel or pneumatic hammer can begin its sampling. It is only as he is completely enveloped by the resulting cloud of dust that he guesses the direction of the path, as if his hand finds in the folds of the slowly becoming structure the suggestion of subsequent investigation; this is the starting point for the pleasure of discovering the mystery that places thought and the continued surprise of a form revealed beyond the limits of thought itself in magical syntony. Pablo then relies on the suggestions of the material to question its soul, to extract a rhythmic, sinuous seduction that glows with a harmony that can be shared, the harmony that Lucio was able to bring out from the canvas following the wound inflicted, thereby provoking renewed amazement. Something not always shared by his artist friends. In a letter dated 12 May 1953, he responded as follows to Tullio Mazzotti (also known as Tullio d’Albissola), his ceramicist of reference: “Whatever you say about holes, it is from holes that the direction of the new art will filter out, purified (Giotto told me so in Padua, then Donatello confirmed it)”. A direction that exalts harmony. The supreme, delicate and palpable harmony that is extracted by Atchugarry from the stone, to be carried on the edge of a classicism that becomes a memory of the present and a projection of the future. The rhythmical proposition of a reason linked to the idea of the drapery couples with the seed of a past that is transformed and becomes a preparatory intention, a reason for further creative suggestion. To look beyond is also to look within oneself and within the world that grows from the seed inherited from a distant time. A world to be explored beyond any wall, beyond any suggestion of investigation. Atchugarry stops each time to contemplate the immense block of life, and then cuts into his own life as he cuts into the stone, digging it out, extracting the sublime juice of surprise from it; likewise Fontana stood before the pristine canvas waiting for the gap, whether surgical or coarse, to open up the direction to another truth, one that is not an easy aesthetic compromise. “My art has never been controversial but contemporary” he affirmed, and with this statement made us understand

that he wanted to interpret the direction of the time that belonged to him with all the transformations taking place. And to achieve this he also availed himself of a tradition with distant roots, as recalled by Guido Ballo: “Considering the development in Fontana’s language, (...) we can say this: he speaks of a new medium in art (...) but in the end, the means he uses are extremely ancient: ceramics, earth, stones, (...), iron, canvas, paper, card; and the effects, while they are unprecedented from an expressive point of view, would like to take us into the future (they make that clear), but more decisively they lead us back to the beginning”. Atchugarry also works with his hands and makes use of the recurring gesture inherited over the centuries to question the material with patient and curious attention (whether the material in question is white Carrara statue marble or Portuguese pink marble) to decipher the path to be taken and to reveal the conclusive result. The meaning of an art that is beyond any commercial measure or fashionable consumption lies in the initial contemplation of a hypothetical “blank page” to be cut into and from which to extract one’s own story, and consequently the history of one’s time. As it was for Lucio, it is today for Pablo. Luciano Caprile

With FERNANDS HUTS at the installation of Movement in the World, Beveren (Belgium), 2014

Pablo Atchugarry was born in Montevideo, Uruguay, on 23 August 1954. His parents, Maria Cristina Bonomi and Pedro Atchugarry Rizzo, passionate art enthusiasts, identified Pablo’s artistic talent and interest when he was still a child and encouraged him to pursue a career as an artist. In his earliest works, he expressed himself through painting, gradually discovering other materials such as cement, iron and wood. In 1971, his first cement sculpture was entitled Horse; this was followed by other cement and iron sculptures including Escriturasimbólica (1974), Estructuracósmica (1974), Metamorfosisprehistórica (1974), Maternidad (1974) and Metamorfosisfemenina (1974).cIn the late 1970s, after taking part in several exhibitions in Montevideo, Buenos Aires, Puerto Alegre and Brasilia, Atchugarry made a number of trips to Europe to study and perfect his art. He travelled to Spain, France and Italy, where he mounted his first solo exhibition in Lecco in 1978. His paintings were subsequently exhibited in a variety of European cities, including Milan, Copenhagen, Paris, Chur, Bergamo and Stockholm. After experimenting with a range of different materials, in 1979 Atchugarry discovered the extraordinary elegance of marble and he carved his first sculpture in Carrara, entitled La Lumière. His first monumental sculpture carved from Carrara marble was completed in 1982. That same year, the artist settled permanently in Lecco, working on the sculpture La Pietà, carved from a single block of marble weighing 12 tonnes. In 1987, he held his first solo sculpture exhibition in Bramantino’s Crypt in Milan, curated by Raffaele de Grada. Late 1996 saw the installation of the sculptureSemilla de la Esperanza in the monumental sculpture park in the grounds of Uruguay’s government building. In 1999, the artist founded the Museo Pablo Atchugarry in Lecco to house works spanning his entire career alongside bibliographical documentation and an archive. Twenty years after his arrival in Italy, the Province of Milan organised a retrospective of Atchugarry’s work entitled “The Infinite Evolutions of Marble” at the Palazzo Isimbardi in Milan. In the same year, he sculpted his first monumental work entitled the Obelisk of the Third Millennium, a six-metre-high Carrara marble sculpture for the Italian town of Manzano (Udine). He also won the competition to created Lecco’s Monument to theCulture and Civilisation of Work, a sculpture in white Bernini marble also six metres high and weighing in at 30 tonnes. In 2002, Pablo Atchugarry was awarded the “Michelangelo” prize in Carrara in recognition of his career as an artist. He was also committed to a range of projects that year, including the Idealssculpture, which stands on Avenue Princesse Grace in Monaco and was created to commemorate the 50th anniversary of the coronation of Prince Rainier. In 2003, he participated in the 50th Venice Biennale - International Art Exhibition with the sculpture Soñando la paz, a work consisting of eight pieces, five in Carrara marble and three in Bardiglio della Garfagnana marble. Also in 2003, he sculpted Ascension for the Fundació Fran Daurel in Barcelona. In 2004, he carved Vital Energy, a Portuguese pink marble sculpture for the BellinsonCenter in Petah Tikva, Israel, and the following year the National Museum of Fine Arts in Buenos Aires staged an exhibition of his work. From June to November 2006, the Groeningemuseum in Bruges, Belgium held a major retrospective exhibition of the artist’s career, including works from international private collections; in the same year, the Museu Coleção Berardo in Portugal acquired Vital Path.

In early 2007, Atchugarry opened the Fundación Pablo Atchugarry in Manantiales, Uruguay, with the aim of providing a stimulus for the arts and creating a place for artists of all disciplines to meet in an ideal location that combines nature and art. In the same year, he completed an eight-metre-high monumental work In the Light, carved from a single 48-tonne block of marble, for the Collezione Fontana in Italy. In 2007-2008, a retrospective exhibition dedicated to his work entitled The Plastic Space of Light was held in Brazil, accompanied by a critical text written by Luca Massimo Barbero. Initially staged at the Banco do Brasil Cultural Centre in Brasilia, the exhibition travelled to the MuBe (Museu Brasiliero da Escultura) in São Paulo and the Museu Oscar Niemeyer in Curitiba. In 2008, the Museo Nacional de Artes Visuales in Montevideo dedicated a retrospective exhibition to Atchugarry’s work of the preceding 15 years. In 2009 Atchugarry created the work Luz y Energía de Punta del Este, carved from a single five-metre-high block of Carrara marble, for the hundredth anniversary of the city of Punta del Este. In 2011, after seven years of work, he completed Cosmic Embrace, carved from a 56-tonne, 8.5-metre-high block of marble, and the same year the Hollis Taggart Galleries in New York organised a solo show, curated by Jonathan Goodman. In March 2012, the Times Square Alliance association selected Dreaming New York to be exhibited in Times Square during The Armory Show Art Fair in New York City. In April 2014, the 8.35-metre-high Carrara marble sculpture Movement in the World was installed in the town of Kallo-Beveren, Belgium. In late 2013, Mondadori Electa published the Catalogo Generale della scultura, two volumes edited by Professor Carlo Pirovano cataloguing every sculpture produced by the artist between 1971 and 2013. The Museu Brasiliero da Escultura in São Paulo, Brazil dedicated a major retrospective to the artist’s work, entitled “A Viagem pela matéria” (A Journey Through th Material), from July to September 2014. The exhibition “Eternal City, eternal marbles”, featuring 40 sculptures, was exhibited at the Museo dei Fori Imperiali - Mercati di Traiano in Rome from 22 May 2015 to 7 February 2016. The same year in June, the sculpture “Endless Evolution” was inaugurated in the sculpture park of the Perez Art Museum Miami. In May 2018, after forthy years, Pablo come back to Paris with a solo show exhibition at the Opera Gallery. Pablo Atchugarry’s works have also been exhibited at the following museums and public institutions: Museo Nacional de ArtesVisuales, Montevideo; Museo del Parco, Portofino; Museo Nacional de Bellas Artes, Buenos Aires; Museo Lercaro, Bologna; Collezione della Provincia di Milano a Palazzo Isimbardi; Collezione della Provincia di Lecco; Fundació Fran Daurel, Barcelona; Groeningemuseum, Bruges; Museu Coleção Berardo, Lisbon; Pérez Art Museum, Miami; The Patricia &amp; Phillip Frost Art Museum, Miami; Chrysler Museum of Art, Norfolk; Museo Brasilero da Escultura, São Paulo. Atchugarry currently lives and works between Lecco and Manantiales, where he oversees the development of the Fundación Pablo Atchugarry, with an international monumental sculpture park, as well as teaching and promoting art.