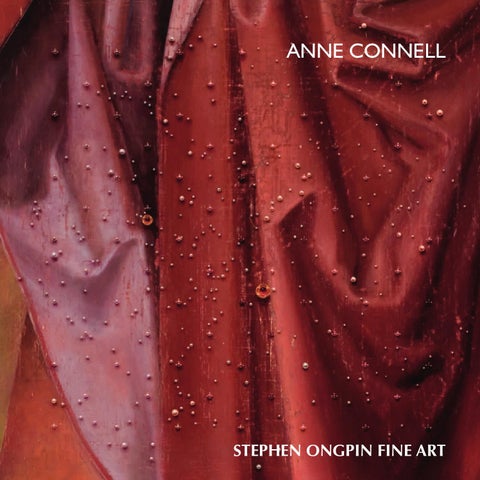 I am delighted to present a selection of recent paintings and works on paper by Anne Connell, an artist who lives and works in Portland, Oregon. This is the second exhibition of Anne’s work outside America, following the success of her inaugural exhibition at my London gallery in 2009, and represents a body of work executed over the past four years. When I first came across Anne’s paintings, at a New York gallery in 2001, I was instantly taken with the way in which her work reflected her obvious love of the art of the early Renaissance. She has lived and worked for some time in Italy, and her paintings often sample images and patterns from Quattrocento sources, which she presents in unfamiliar ways to create an expressive vocabulary with its own meanings and purposes. Another part of the appeal of Anne’s work is the sheer craftsmanship evident in all of her works, characterized by a painstaking technique of oil, silverpoint, and, occasionally, gold leaf on prepared panels. This selection of recent works includes examples of a method particularly close to my heart: the use of silverpoint, a technique associated with Italian and Flemish drawings of the 14th and 15th centuries. Anne’s intimately scaled paintings demand, and ultimately reward, the quiet contemplation of the viewer. As the American writer and novelist Elizabeth Gilbert has so aptly noted of her work, ‘Anne Connell invents worlds. Tiny, immaculate, and fascinating glimpses of worlds, to be precise. (And “precise” is the correct word to use here, because Anne paints with the detailed rigor of a master jeweler.) There is no actual place on earth that quite resembles her contrivances, but they have always evoked in me a deep sense of homesickness, nonetheless: a tangible longing to make myself very small and very quiet, so that I could slip somehow right into that world which does not – but which absolutely should – exist. That sense of enchantment, of magic, shimmers in every corner of this fabulist’s work, and it is not easily forgotten.’ Another writer, Andrew Solomon, has written of Anne’s paintings that ‘Though they are sometimes playful, they are also mystical. That shimmering, smooth surface, the decorative elements that rise sensually from the picture plane, the elegant fragments that seem almost flirtatiously to ask why and how they were selected, all seduce without giving away their secrets. You see at once that the work is beautiful, but you can tell that it is not simply about its own beauty.’ It has been a great pleasure to work with Anne on this second exhibition of her work at my gallery, and I would also like to thank my wife Laura and my colleagues Lavinia Harrington and Guy Peppiatt for their help and encouragement. Anne and I are immensely grateful to Ann Patchett for contributing a text for this catalogue, and would also like to thank Dean Hearn, Loren Nelson, Todd Putnam and Framing Resource, Jenny Willings, Mollie Wisecarver, the Brush Creek Foundation for the Arts, and the Corporation of Yaddo. Stephen Ongpin

In this modern age when penmanship is no longer taught, the paintings of Anne Connell feel less like paintings and more like the final, vital link to what we as a species must once have been capable of. Not all of us, of course, but surely there are a few geniuses in every generation. It’s just that these days the Rembrandts are designing sleeker dishwashers and iPhone covers. The talent meant for painting so rarely goes to painting anymore – which is why, seeing Anne Connell’s paintings for the first time, we may momentarily suspect we’re being tricked. Computer generated? A clever amalgamation of clip art? We peer into the frame. My God, she did that? So stunning is the skill with which Connell executes the fabric’s drape and spray of pearls, so far removed is this mastery of technique from anything we encounter in our daily lives, that it takes some time to be able to recognize that the real genius is in the composition. This is one of the deepest pleasures of the work, that every level of it stuns us into stillness. We must absorb the way she paints before we can begin to take in what it is she’s painted – the stack of dice which nearly vanish in the painting’s corner, white against white; the elegant sprawl of a signature across an opened envelope; the juniper trees peeking in through an ornate opening in a wall, the light of heaven behind them. The images interrelate like tarot cards, their combined elements spelling out a message we can’t quite read but which continually draws us in. I love these paintings at every level. No matter how often I come back to them, I find something else to teach me. The work is shocking in its authenticity, new in its patient understanding of everything that came before it. The pleasure of each piece is timeless, limitless. Ann Patchett

9. The Million Lamps of Heaven

Novello with Scenes of His Miracles (1320s), in the Pinacoteca, Siena. The architectural detail on the left was adapted from a panel by Sassetta, A Miracle of the Sacrament, in the Bowes Museum, Barnard Castle, Durham. No.5 Variety & Glow Oil and silverpoint on panel 26.6 × 26.6 cm. (10½ × 10½ in.) 2010–2013 The view through the oculus is a detail from Francesco d’Antonio’s Christ Healing a Lunatic and Judas Receiving Thirty Pieces of Silver (c.1425) in the Philadelphia Museum of Art. The title comes from a letter Jane Austen wrote to her nephew, James Edward Austen-Leigh (‘What should I do with your strong, manly, spirited Sketches, full of variety & Glow?’). No.6 Niche Oil and gold leaf on panel 14.8 × 9 cm. (5¾ × 3½ in.) 2006 No.7 Study with Towers Gouache on marbled paper mounted on panel 30.5 × 30.5 cm. (12 × 12 in.) 2010 The towers come from the Vision of St. Dominic and Meeting of St. Francis and St. Dominic (1452), from Benozzo Gozzoli’s fresco cycle of the life and deeds of St. Francis in the church of San Francesco, Montefalco.

The drapery is a detail from the Portinari triptych by Hugo van der Goes (c.1473–1478) in the Galleria degli Uffizi, Florence. The pearls and gems represent a star chart of the northern sky in April.

The silverpoint detail on the label is taken from a red chalk drawing by Agostino Carracci, Portrait of the Artist’s Son, Antonio Carracci (c.1590s), in the Art Institute of Chicago. The floral detail is adapted from a 16th-century woodcut of a rosebush.

The hands are freely adapted from Fra Angelico. The title can be found in chapter 34 of Jane Eyre, by Charlotte Brontë (‘Don’t cling so tenaciously to ties of the flesh; save your constancy and ardour for an adequate cause; forbear to waste them on trite transient objects.’).

The landscape was freely adapted from Sassetta’s Journey of the Magi (1320s), in the Pinacoteca, Siena. The figure detail is from the Annalena altarpiece (c.1453) by Fra Angelico, in the Museo di San Marco, Florence.

What should I do with your strong, manly, spirited Sketches, full of variety & Glow? â&#x20AC;&#x201C; How could I possibly join them on to the little bit (two Inches wide) of Ivory on which I work with so fine a Brush, as produces little effect after much labour? â&#x20AC;&#x201C; Jane Austen, in a letter to her nephew, December 1816