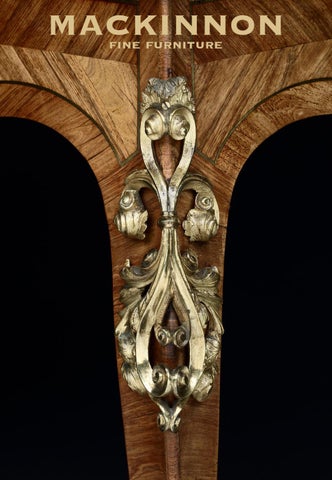 A Pair of George III Card Tables from Stowe attributed to john cobb england, circa 1775

A very fine pair of George III kingwood and brass-inlaid card tables attributed to John Cobb. The table tops quarter-veneered with a mounted edge, the top enclosing a sliding tray with a container for cards, with a shaped frieze, standing on cabriole legs with ormolu sabots. Each table with outstanding ormolu mounts to the knees. Of particularly fine colour. Height: 29Â˝ in (75 cm) Width: 36 in (92 cm) Depth: 17Âž in (45 cm)

Stowe House Stowe House, Buckinghamshire is one of the largest and grandest of England’s stately homes. The first house on the site was built for Sir Richard Temple, 3rd Baronet (1634-1697) between 1677 and 1683. The architect William Cleare, who trained under Christopher Wren, was commissioned to design the house. Richard Temple, 1st Viscount Cobham (16751749) commissioned Sir John Vanbrugh (16641726) to significantly expand the house in the early 18th century to a span of almost 1,000 feet. After Vanbrugh’s death in 1726, William Kent carried on the work on the house. Richard Grenville-Temple, 2nd Earl Temple (17111779) brought in Robert Adam to produce a new design for the south front and with the input of Thomas Pitt and Giovanni Battista Borra, the house had a new façade by 1779. At the same

time, the Italian designer Vincenzo Valdrè was commissioned to update the interiors. Stowe’s history and heritage is defined by the continual updates and developments led by the successive generations who hired the aforementioned notable architects and designers as well as Capability Brown, James Gibbs, and John Soane. Stowe was widely admired for its architectural grandeur and expansive landscape garden. Benton Seeley published one of the very first country house guidebook to Stowe and its gardens in 1744, which was widely admired. In the following years Stowe received a number of notable guests, including Thomas Jefferson and John Adams, who visited Stowe together in 1786.

Soane (1753-1837) to carry out both of these projects. Grenville converted the East Gallery at Stowe into the Large Library and also created a Gothic Library, reflecting a rare interior in this style by Soane.

Grenville attended Eton College followed by Christ Church, Oxford before he embarked on a Grand Tour through Italy and Austria in 1774. When he returned to England, he became a member of the House of Commons, and when he succeeded his uncle as Earl Temple in 1779 he joined the House of Lords.

Grenville acquired fantastic quantities of fine furniture, paintings and works of art to compliment the grandeur and magnificence of the interiors. One of two portraits of Grenville by Thomas Gainsborough shows him in an intimate and academic setting surrounded by books and papers, which was meant to signal his love and passion for books. In the portrait Grenville wears the ‘Windsor Uniform,’ which was introduced by George III in the 1770s for favoured courtiers and members of the royal family.

During his tenure, Grenville expanded the family’s collection and focused his attentions on enhancing both Stowe and his London residence, Buckingham House (later to become Buckingham Palace). He commissioned John

John Cobb These tables can be attributed to the workshop of John Cobb (1715-1778). Cobb was born in Ashby, Norfolk, and he began his career as an apprentice to Timothy Money, an upholsterer in Norwich, in 1729. Cobb married Sukey, the daughter of renowned cabinetmaker Giles Grendey, in 1755. The marriage may well have provided Cobb with useful connections. Cobb formed a partnership with William Vile (1700-1767) from 1750 until 1765, and they ran their workshop from 72 St Martin’s Lane. Vile &amp; Cobb held the Royal Warrant from 1761 through the end of 1764. They created a sumptuous jewel cabinet for Queen Charlotte, which is described in the bill as ‘very handsome… made of many different kinds of fine Woods’ as well as having ‘all the Front, Ends and Top inlaid with Ivory in Compartments and nearly Engraved.’ After Vile died in 1767, Cobb carried on with the business with his foreman, Samuel Reynolds.

Cobb was highly skilled at cabinetry with a particular specialty in impressive marquetry work in topical woods. Hester Thrale, a friend of Dr Johnson, described the inlaid floors at Sceux, France as comparable with ‘the most high prized Cabinet with Mr Cobb can produce to captivate the Eyes of his Customers.’ One such piece of marquetry furniture by Cobb was an ‘Extra neat Inlaid Commode’ along with two pedestals en suite for Paul Methuen at Corsham Court, Wiltshire. Cobb had a number of notable clients during his career, including the 6th Earl of Coventry at Croome Court, Worcestershire, who ordered a large mahogany wardrobe and extensive suite of seating in the neo-classical taste. He also received commissions for Burton Hall, Linconshire, Uppark, West Sussex, Audley End, Essex, and David Garrix’s villa at Hampton, Middlesex. Cobb died in 1778. He had maintained a successful business through the end, with a number of properties and £20,000 in stocks.

The Tables The English fascination and appreciation of French design was well established in 18th century England. Despite the curtailment of trade during The Seven Years War of 1756-1763 the appetite for French fashions in England did not subside. Due to the trade restrictions, English craftsmen sought to emulate French designs for their patrons who wanted their furniture and art to reflect contemporary leading French taste. Vile &amp; Cobb excelled at producing furniture in this French style. These tables with their quarter-veneered tops of exotic kingwood, elegant serpentine feminine

form together with graceful cabriole legs, the friezes similarly veneered and inlaid with brass, and exuberant ormolu mounts epitomize this French taste. The present tables relate both in profile and construction to a further pair of card tables with the same Stowe provenance (offered Sothebyâ&amp;#x20AC;&amp;#x2122;s New York, Tom Devenish: The Collection, Highly Important Furniture, 24th April 2008, lot 115). Both pairs share the same form of frieze and concertina action, and the other pair is shown illustrated in situ in Stowe, circa 1920 in the Green Drawing Room.

John Zoffany The artist John Zoffany R.A. (1733-1810) painted a portrait of the Dutton family shown in the Drawing Room at the family home Sherborne Park, Gloucestershire. The painting depicts the patriarch James Lennox Dutton in conversation with his second wife, Jane Bond on the righthand side with their eldest son, James in conversation with his sister Jane to the left. The family is seated around an elegant kingwood card table that bears remarkable resemblance to the current pair of tables. The distinctive figuring of the kingwood is highlighted on the tapered cabriole legs along with the elegant ormolu mounts.

John Zoffany, Portrait of the Dutton Family at Sherborne Park, Gloucestershire. (previous overleaf) detail of the portrait showing the table in closer detail.

This portrait is a fantastic depiction of life in the 18th century and shows how the tables would have been both a useful piece of furniture but also a sign of wealth, elegance, and taste. The portrait remained in the family until sold at Christieâ&amp;#x20AC;&amp;#x2122;s in 1929 and has been in private hands since. The painting is regarded as one of Zoffanyâ&amp;#x20AC;&amp;#x2122;s finest group portraits and was exhibited at the Royal Academy in 2012.

The Stowe Sale of 1848 Richard Grenville, 2nd Duke of Buckingham and Chandos (1797-1861), inherited his title in 1839. Grenville had grand plans for Stowe and sought to add to his predecessor’s designs. However, due to poor management of funds, Grenville quickly ran up a large number of debts. In preparation for a royal visit by Queen Victoria in 1845, Grenville borrowed even more money which only made his debts worsen. Unfortunately, he declared bankruptcy in 1847 with debts over a million pounds, which amounts to roughly £90 million in today’s currency. An article in The Times noted that he ‘flung it all away by extravagance and folly, and reduced his honours to the tinsel of a pauper and the bauble of a fool.’

These debts led Grenville to sell the collections of Stowe, including everything from the house contents to the deer in the park, over forty days in August and September 1848 with Christies. The present pair of card tables was not sold in this sale, nor were they sold in the 1922 sale, which featured another large selection of pieces from the Stowe collection. Instead the tables have remained in the family until the present day.