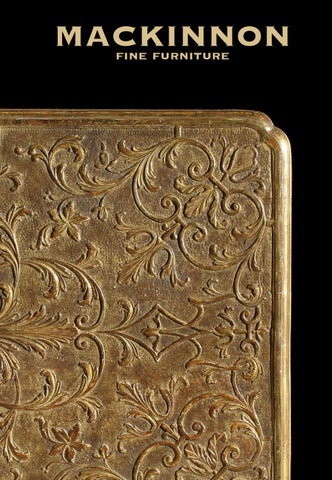 A Pair of George I Gilt Gesso Tables

A Pair of George I Gilt Gesso Tables attributed to elizabeth gumley england, circa 1720

An exceptional and very rare matched pair of George I gilt gesso tables attributed to Elizabeth Gumley. The tops with re-entrant corners and carved with an elaborate design of acanthus leaves and strapwork, standing above a shaped frieze similarly decorated and centred by a shell, raised on cabriole legs with boldly scrolled acanthus leaves to the knees and particularly rare inverted scroll feet. Of identical size, one is a side table and one is a centre table, the side table having gilt gesso decoration on three sides of the frieze while the centre table is decorated on all four sides. The tops, following the same overall pattern, are different in their decorative carving, and the side table has carved beading to the legs. The side table stamped E.G. to the underside. Height: 30Âź in (77 cm) Width: 20Âź in (51 cm) Depth: 31Âź in (79 cm)

Elizabeth Gumley & Family The stamped ‘E.G.’ on the underside of the side table almost certainly refers to the cabinetmaker Elizabeth Gumley (1647-1751), who was part of a renowned family of cabinetmakers in the late 17th and early 18th centuries. Elizabeth worked in partnership with her husband, Peter (16741702), and son, John (1691-1728), and together the family firm supplied tables, chests, japanned cabinets, and looking glasses, which was one of the firm’s specialties. Their premises were at the Exeter Exchange on the Strand, in London, at the corner of Norfolk Street. Exeter Exchange was built in 1680, and the premises offered a ground floor arcade for seamstress, milliners, drapers, and other artisans, while the Gumleys operated their warehouse from the upper floors. In 1714, the Gumleys took out an announcement in Richard Steele’s

The Lover, stating, ‘These are to give Notice. That John Gumley hath taken for a Ware-house, and furnished all the upper Part of the New Exchange in the Strand…with the largest and finest Looking Glasses in Frames, and out of Frames… Likewise all sorts of Coach-Glasses, Chimney Glasses, Sconces, Dressing-Glasses, Union-Suits, DressingBoxes, Swinging-Glasses, Glass Schandeleres, Lanthorns, Gilt Brockets, Desks and Book-Cases, India Chests and Cabinets, Screens, Tea Tables, Card-Tables of all kinds, Strong Boxes, and the like.’ Dudley Ryder, a law student, commented on the Gumley’s impressive workshop in 1715 saying, ‘Went into the glass warehouse over the New Exchange. There is indeed a noble collection of looking glasses, the finest I believe in Europe.’

Map of the Strand circa 1720 showing Exeter Exchange, the site of the Gumley workshop, across from the Savoy.

James Moore: A Partnership The Gumleys collaborated with the cabinetmaker James Moore (1670-1726), one of the most celebrated English furniture makers of the early 18th century. It is thought that Moore would have received some of his training from Elizabeth Gumley in his early career. The Gumleys and Moore entered into partnership in 1714 and received patronage from King George I in the royal household, carrying out a number of important commissions in Hampton Court and St. James’s Palace. As partners, the Gumleys and Moore supplied two magnificent gilt gesso tables for George I,

one of which features Moore’s signature incised on the upper band of the table’s burnished gold border. In addition to the tables, they also supplied an accompanying pair of gilt torcheres. Moore also received a number of notable commissions from influential patrons including the Duchess of Marlborough at Blenheim Palace, the Duke of Montagu at Boughton, and the Earl of Burlington. A number of these commissions were almost certainly carried out in partnership with the Gumley firm.

Elizabeth Gumley When Elizabeth Gumley’s son John died in 1728, she took over his appointment as royal cabinetmaker. She carried on the business in partnership with William Turing, and together, the two supplied the Royal Household with several ‘fine large Mohogany dining tables’ followed by three further tables in 1728-29. Many of the bills addressed to the Gumley firm refer to John Gumley or the Gumley firm in general, but there are several surviving accounts that directly mention Elizabeth Gumley.

One such bill from 1730 reads, ‘Bought of Elzath. Gumley/June1st Two New Glasses and a New Door to a Lantern Agreed at 12s’ for Paul Foley of Newport House, Heresfordshire At Erddig, Wales, John Meller recorded in accounts of 1724: ‘Bought of Elizabeth Gumley December 3 A Sconce in a Carv’d and Gilt Frame £4. 5s.’ John Morgan of Tredegar House, Monmouthshire acquired a table from Elizabeth Gumley in 1726 noted in the accounts as ‘June 1 Mrs Gumley for a walnut tree Quadrille table £3. 10s.’

Gilt Gesso The particular style of decoration used to decorate the these tables is known as gilt gesso. Gilding was more than just a decorative accent: it was a formidable statement of power, prestige, and undoubtedly, wealth. The art of gilding dates back to ancient Egypt and has been used extensively by almost every culture since antiquity. Gesso is a type of plaster that is prepared of finely ground chalk and applied onto the wooden surface in a series of layers, requiring at least fifteen applications to achieve the desired thickness. Once dried, the craftsmen could cut into the new surface to create elaborate designs. When the designs were complete, the gilding could be applied. Prior to gilding, a clay ground, of ten red, known as bole, would be spread onto the surface to prepare for the laying of the gold leaf. The water gilding applied to these elaborate designs with its

glistening burnished effect allowed the varied surfaces to resemble solid gold. Over the years, gilding wears away to reveal the colour of the base underneath. The style of decoration on gilt gesso pieces of this time, including strapwork and foliate designs, can be traced back to both Italy and France. The technique appeared in England at the end of the seventeenth century with the work of Jean Pelletier, a Huguenot craftsman who received royal patronage at Hampton Court and Kensington Palace. Both the Gumley firm and James Moore expanded on this technique with increased drama and exaggeration to the carving. Furniture historian R.W. Symonds was quick to note that the quality of gesso was unparalleled: â&#x20AC;&#x2DC;It possessed a quality which no carving in wood could emulate.â&#x20AC;&#x2122;

Decorative Vocabulary Much of the inspiration for the decoration for these tables came from the highly influential designs published by Daniel Marot (1661-1752) at the beginning of the eighteenth century. Marot’s style reflected the elaborate Franco-Dutch baroque taste with its scrolling foliage and strapwork that was championed by his contemporaries Jean le Pautre, Jean Berain, and André-Charles Boulle. Marot’s influence is particularly visible in the designs of the tops of these tables. Although there are subtle differences in the decoration, the overall pattern is the same and depicts a central lozenge surrounded by strapwork acanthus foliage with flowering scrolls. All of these elements can be seen in an engraving published by Marot depicting three designs for a headboard (pictured above).

Adam Bowett suggests that the decorative vocabulary and techniques used to execute these designs were similar across the different workshops of the time, making it difficult to pinpoint exact makers for specific pieces. The presence of the stamp of one of these tables with Elizabeth Gumley’s initials potentially helps unravel the mystery. The inverted scroll feet are a rare feature on tables of this period. A variation of this foot can be seen on a pair of tables that the Gumley firm supplied in partnership with William Turing in 1727 to George I for the Great Gallery at Kensington Palace. The four gilt candlestands supplied en suite with the tables also feature this inverted scroll foot. Another example of the inverted scrolled feet can be seen on a table at Chatsworth bearing the cipher WKH, for William, Marquess of Hartington and his wife Katherine, who married in 1718.

A PAIR OF GILT GESSO TABLES

A PAIR OF GILT GESSO TABLES