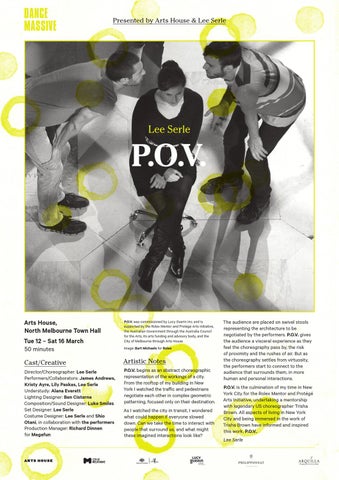 P.O.V. was commissioned by Lucy Guerin Inc; and is supported by the Rolex Mentor and Protégé Arts Initiative, the Australian Government through the Australia Council for the Arts, its arts funding and advisory body, and the City of Melbourne through Arts House Image: Bart Michaels for Rolex

P.O.V. begins as an abstract choreographic representation of the workings of a city. From the rooftop of my building in New York I watched the traffic and pedestrians negotiate each other in complex geometric patterning, focused only on their destination. As I watched the city in transit, I wondered what could happen if everyone slowed down. Can we take the time to interact with people that surround us, and what might these imagined interactions look like?

The audience are placed on swivel stools representing the architecture to be negotiated by the performers. P.O.V. gives the audience a visceral experience as they feel the choreography pass by, the risk of proximity and the rushes of air. But as the choreography settles from virtuosity, the performers start to connect to the audience that surrounds them, in more human and personal interactions. P.O.V. is the culmination of my time in New York City for the Rolex Mentor and Protégé Arts Initiative, undertaking a mentorship with legendary US choreographer Trisha Brown. All aspects of living in New York City and being immersed in the work of Trisha Brown have informed and inspired this work, P.O.V.. Lee Serle

DANCE MASSIVE at arts house Biographies Lee Serle Director/Choreographer Lee Serle has performed in works by Lucy Guerin Inc, Chunky Move (Gideon Obarzanek) and numerous independent choreographers. In 2010 he was selected by the Rolex Mentor and Protégé Arts Initiative to undertake a mentorship with legendary US choreographer Trisha Brown in New York City. He is also an inaugural recipient of the Australia Council for the Arts Creative Australia Fellowship (2012), allowing him to develop his choreographic practice. Lee Serle has choreographed numerous works for Melbourne’s Next Wave festival, A Little Murky for Lucy Guerin’s Pieces for Small Spaces, and P.O.V. at the New York Public Library for the Rolex Arts Weekend. He has also been commissioned to create a new work in 2013 for the Lyon Opera Ballet. James Andrews Performer/Collaborator James Andrews is an emerging Australian dancer and dance-maker. Raised in Sydney, he graduated with a Bachelor of Dance from VCA (2009), where he was the inaugural recipient of the Lionel Gell Foundation scholarship. Since graduating he has worked with companies and independent artists including Chunky Move, Lee Serle, Stephanie Lake, Antony Hamilton, Supple Fox, Adam Wheeler, Shian Law and Y-Glam queer youth theatre project. He is an artistic associate of 2ndToe Dance Collective, presenting both collaborative and solo work, in various forms around Australia. Kristy Ayre Performer/Collaborator Melbourne-based performer, producer, teacher and choreographer, Kristy Ayre, graduated from the VCA in 2001, and has since collaborated and performed with Chunky Move, appearing in over a dozen of the company’s works. She has also performed for Lucy Guerin Inc, Shelley Lasica, Frances d’Ath, Itoh Kim, Prue Lang, Luke George and Lee Serle. Since July 2010 she has been Class Curator for Chunky Move’s Professional and Public dance programs; and was the Senior Teacher and Facilitator for the company’s 2011 Koori Engagement Program. She was an Associate Producer for the 2012 Next Wave festival, overseeing the projects of ten of Australia’s finest young and emerging dance and theatre makers. In 2013, Kristy Ayre will resume her position as an Associate Producer for Next Wave, perform in the Australian premiere of Lee Serle’s P.O.V., and tour with Luke George’s

Now Now Now to Campbelltown Performing Arts Centre, as well as to France and Ireland. Lily Paskas Performer/Collaborator Lily Paskas created In Away for Lucy Guerin’s Pieces for Small Spaces; Slug Love Goonion, The happy pony club come in and The Black Veil for Next Wave festival; and Wade Rising for With the Lot. She has worked with companies and independent choreographers including Chunky Move, Finucane and Smith, Phantom Limbs, Black Lung Theatre and Whaling Firm, Antony Hamilton, Shelley Lasica, Lee Serle, Jo Lloyd, Stephanie Lake, Frances d’Ath, Daniel Schlusser, Rennie McDougall and Melanie Lane. Ben Cisterne Lighting Designer Ben Cisterne is renowned for creating bold designs. He is passionate about the capability of light in design and its role in art, and works collaboratively on projects. He has been instrumental in the development of new techniques in lighting design for the arts and exhibition industries. He has received awards from organisations including the Green Room Awards Association and the Illuminating Engineers Society. Luke Smiles Composition/Sound Designer The introduction of a Commodore 64 computer into the family home in the early 1980s began Luke Smiles’s fascination with computers and sound. Yielding to a keen interest in how things work, he has developed a unique rapport with choreographers and directors in the development of soundtracks for dance and theatre. Working under his business name motion laboratories, Luke has composed and produced soundtracks for many Australian and international artists and companies. His credits include G (Australian Dance Theatre), Double Think and One Show Only (Byron Perry), Glow (Chunky Move), I left my shoes on warm concrete and stood in the rain (Gabrielle Nankivell), Infinity (Rambert Dance Company), Roadkill (Splintergroup), and Fugitive and School Dance (Windmill Theatre Company). Shio Otani Co-Costume Designer Melbourne-based costume designer Shio Otani is a self-confessed crafter, interested in all things hand-made and working across diverse platforms including theatre, dance, jewelry design and textiles. She has designed costumes for Back to Back Theatre (Ganesh vs the Third Reich, Food Court, Small Metal Objects, Soft), Lucy

Arts House artshouse.com.au artshouse@melbourne.vic.gov.au (03) 9322 3720 521 Queensberry Street North Melbourne VIC 3051 Arts House presents contemporary arts in programs encompassing performance, exhibitions, live art, residencies and other activities that nurture, support and stimulate cultural engagement. We value work in which artists at different stages of their careers, as well as our diverse audiences and communities, are actively involved in creating an imaginative, just and environmentally sustainable global society. Arts House’s programs include two curated public seasons of multidisciplinary work each year. From 2013, approximately half of this work will be selected through a new Expression of Interest process. We seek artists who are responding to the urgent issues of our time in imaginative and surprising ways, taking artistic risks and offering multiple ways for audiences to engage with or co-author their work. For more information, please contact us on (03) 9322 3720 or visit artshouse.com.au.

Arts House is a City of Melbourne contemporary arts initiative