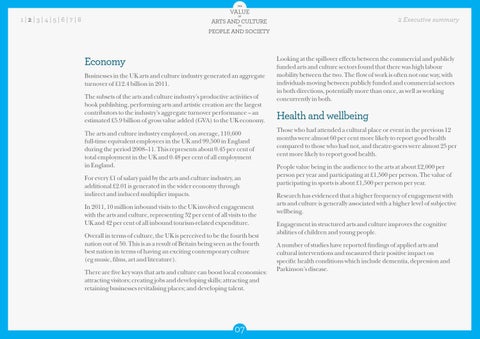 ARTS AND CULTURE TO

Economy Businesses in the UK arts and culture industry generated an aggregate turnover of £12.4 billion in 2011. The subsets of the arts and culture industry’s productive activities of book publishing, performing arts and artistic creation are the largest contributors to the industry’s aggregate turnover performance – an estimated £5.9 billion of gross value added (GVA) to the UK economy. The arts and culture industry employed, on average, 110,600 full-time equivalent employees in the UK and 99,500 in England during the period 2008–11. This represents about 0.45 per cent of total employment in the UK and 0.48 per cent of all employment in England. For every £1 of salary paid by the arts and culture industry, an additional £2.01 is generated in the wider economy through indirect and induced multiplier impacts. In 2011, 10 million inbound visits to the UK involved engagement with the arts and culture, representing 32 per cent of all visits to the UK and 42 per cent of all inbound tourism-related expenditure. Overall in terms of culture, the UK is perceived to be the fourth best nation out of 50. This is as a result of Britain being seen as the fourth best nation in terms of having an exciting contemporary culture (eg music, films, art and literature). There are five key ways that arts and culture can boost local economies: attracting visitors; creating jobs and developing skills; attracting and retaining businesses revitalising places; and developing talent.

Looking at the spillover effects between the commercial and publicly funded arts and culture sectors found that there was high labour mobility between the two. The flow of work is often not one way, with individuals moving between publicly funded and commercial sectors in both directions, potentially more than once, as well as working concurrently in both.

Presenting the latest research on the impact and value of arts and culture on our economy, health and well-being, society and education. 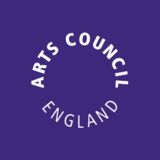