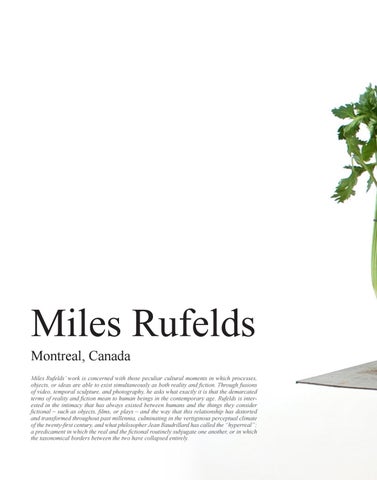 Miles Rufelds’ work is concerned with those peculiar cultural moments in which processes, objects, or ideas are able to exist simultaneously as both reality and fiction. Through fusions of video, temporal sculpture, and photography, he asks what exactly it is that the demarcated terms of reality and fiction mean to human beings in the contemporary age. Rufelds is interested in the intimacy that has always existed between humans and the things they consider fictional – such as objects, films, or plays – and the way that this relationship has distorted and transformed throughout past millennia, culminating in the vertiginous perceptual climate of the twenty-first century, and what philosopher Jean Baudrillard has called the “hyperreal”: a predicament in which the real and the fictional routinely subjugate one another, or in which the taxonomical borders between the two have collapsed entirely.