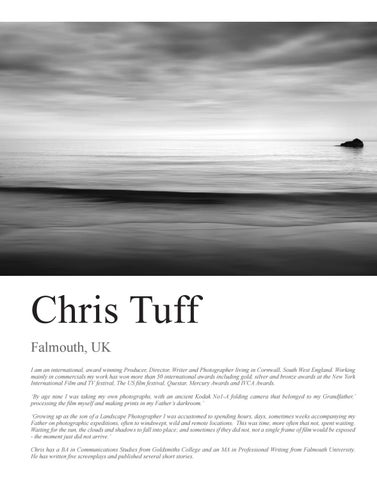 Chris Tuff Falmouth, UK I am an international, award winning Producer, Director, Writer and Photographer living in Cornwall, South West England. Working mainly in commercials my work has won more than 50 international awards including gold, silver and bronze awards at the New York International Film and TV festival, The US film festival, Questar, Mercury Awards and IVCA Awards. ‘By age nine I was taking my own photographs, with an ancient Kodak No1-A folding camera that belonged to my Grandfather,’ processing the film myself and making prints in my Father’s darkroom.’ ‘Growing up as the son of a Landscape Photographer I was accustomed to spending hours, days, sometimes weeks accompanying my Father on photographic expeditions, often to windswept, wild and remote locations. This was time, more often that not, spent waiting. Waiting for the sun, the clouds and shadows to fall into place; and sometimes if they did not, not a single frame of film would be exposed - the moment just did not arrive.’ Chris has a BA in Communications Studies from Goldsmiths College and an MA in Professional Writing from Falmouth University. He has written five screenplays and published several short stories.