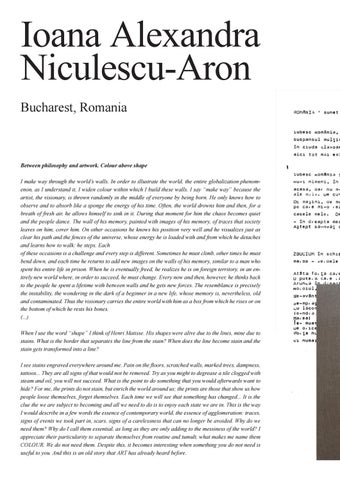 Between philosophy and artwork. Colour above shape I make way through the world’s walls. In order to illustrate the world, the entire globalization phenomenon, as I understand it, I widen colour within which I build these walls. I say “make way” because the artist, the visionary, is thrown randomly in the middle of everyone by being born. He only knows how to observe and to absorb like a sponge the energy of his time. Often, the world drowns him and then, for a breath of fresh air, he allows himself to sink in it. During that moment for him the chaos becomes quiet and the people dance. The wall of his memory, painted with images of his memory, of traces that society leaves on him, cover him. On other occasions he knows his position very well and he visualizes just as clear his path and the fences of the universe, whose energy he is loaded with and from which he detaches and learns how to walk: he steps. Each of these occasions is a challenge and every step is different. Sometimes he must climb, other times he must bend down, and each time he returns to add new images on the walls of his memory, similar to a man who spent his entire life in prison. When he is eventually freed, he realizes he is on foreign territory, in an entirely new world where, in order to succeed, he must change. Every now and then, however, he thinks back to the people he spent a lifetime with between walls and he gets new forces. The resemblance is precisely the instability, the wondering in the dark of a beginner in a new life, whose memory is, nevertheless, old and contaminated. Thus the visionary carries the entire world with him as a box from which he rises or on the bottom of which he rests his bones. (...) When I use the word “shape” I think of Henri Matisse. His shapes were alive due to the lines, mine due to stains. What is the border that separates the line from the stain? When does the line become stain and the stain gets transformed into a line? I see stains engraved everywhere around me. Pain on the floors, scratched walls, marked trees, dampness, tattoos... They are all signs of that would not be removed. Try as you might to degrease a tile clogged with steam and oil, you will not succeed. What is the point to do something that you would afterwards want to hide? For me, the prints do not stain, but enrich the world around us; the prints are those that show us how people loose themselves, forget themselves. Each time we will see that something has changed... It is the clue the we are subject to becoming and all we need to do is to enjoy each state we are in. This is the way I would describe in a few words the essence of contemporary world, the essence of agglomeration: traces, signs of events we took part in, scars, signs of a carelessness that can no longer be avoided. Why do we need them? Why do I call them essential, as long as they are only adding to the messiness of the world? I appreciate their particularity to separate themselves from routine and tumult, what makes me name them COLOUR. We do not need them. Despite this, it becomes interesting when something you do not need is useful to you. And this is an old story that ART has already heard before.