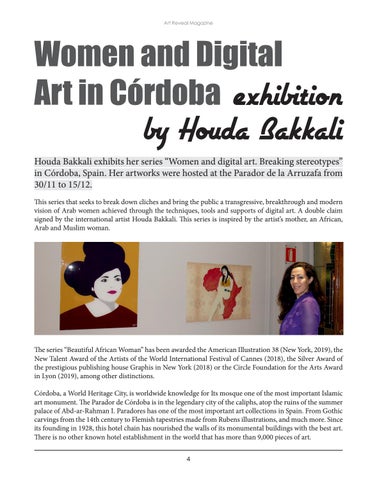 Houda Bakkali exhibits her series “Women and digital art. Breaking stereotypes” in Córdoba, Spain. Her artworks were hosted at the Parador de la Arruzafa from 30/11 to 15/12. This series that seeks to break down cliches and bring the public a transgressive, breakthrough and modern vision of Arab women achieved through the techniques, tools and supports of digital art. A double claim signed by the international artist Houda Bakkali. This series is inspired by the artist’s mother, an African, Arab and Muslim woman.

The series “Beautiful African Woman” has been awarded the American Illustration 38 (New York, 2019), the New Talent Award of the Artists of the World International Festival of Cannes (2018), the Silver Award of the prestigious publishing house Graphis in New York (2018) or the Circle Foundation for the Arts Award in Lyon (2019), among other distinctions. Córdoba, a World Heritage City, is worldwide knowledge for Its mosque one of the most important Islamic art monument. The Parador de Córdoba is in the legendary city of the caliphs, atop the ruins of the summer palace of Abd-ar-Rahman I. Paradores has one of the most important art collections in Spain. From Gothic carvings from the 14th century to Flemish tapestries made from Rubens illustrations, and much more. Since its founding in 1928, this hotel chain has nourished the walls of its monumental buildings with the best art. There is no other known hotel establishment in the world that has more than 9,000 pieces of art. 4