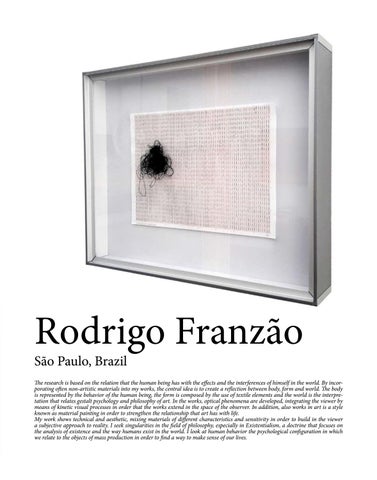 The research is based on the relation that the human being has with the effects and the interferences of himself in the world. By incorporating often non-artistic materials into my works, the central idea is to create a reflection between body, form and world. The body is represented by the behavior of the human being, the form is composed by the use of textile elements and the world is the interpretation that relates gestalt psychology and philosophy of art. In the works, optical phenomena are developed, integrating the viewer by means of kinetic visual processes in order that the works extend in the space of the observer. In addition, also works in art is a style known as material painting in order to strengthen the relationship that art has with life. My work shows technical and aesthetic, mixing materials of different characteristics and sensitivity in order to build in the viewer a subjective approach to reality. I seek singularities in the field of philosophy, especially in Existentialism, a doctrine that focuses on the analysis of existence and the way humans exist in the world. I look at human behavior the psychological configuration in which we relate to the objects of mass production in order to find a way to make sense of our lives.