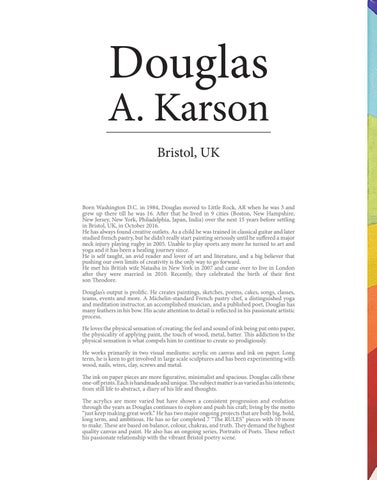 Born Washington D.C. in 1984, Douglas moved to Little Rock, AR when he was 3 and grew up there till he was 16. After that he lived in 9 cities (Boston, New Hampshire, New Jersey, New York, Philadelphia, Japan, India) over the next 15 years before settling in Bristol, UK, in October 2016. He has always found creative outlets. As a child he was trained in classical guitar and later studied french pastry, but he didn’t really start painting seriously until he suffered a major neck injury playing rugby in 2005. Unable to play sports any more he turned to art and yoga and it has been a healing journey since. He is self taught, an avid reader and lover of art and literature, and a big believer that pushing our own limits of creativity is the only way to go forward. He met his British wife Natasha in New York in 2007 and came over to live in London after they were married in 2010. Recently, they celebrated the birth of their first son Theodore. Douglas’s output is prolific. He creates paintings, sketches, poems, cakes, songs, classes, teams, events and more. A Michelin-standard French pastry chef, a distinguished yoga and meditation instructor, an accomplished musician, and a published poet, Douglas has many feathers in his bow. His acute attention to detail is reflected in his passionate artistic process. He loves the physical sensation of creating; the feel and sound of ink being put onto paper, the physicality of applying paint, the touch of wood, metal, batter. This addiction to the physical sensation is what compels him to continue to create so prodigiously. He works primarily in two visual mediums: acrylic on canvas and ink on paper. Long term, he is keen to get involved in large scale sculptures and has been experimenting with wood, nails, wires, clay, screws and metal. The ink on paper pieces are more figurative, minimalist and spacious. Douglas calls these one-off prints. Each is handmade and unique. The subject matter is as varied as his interests; from still life to abstract, a diary of his life and thoughts. The acrylics are more varied but have shown a consistent progression and evolution through the years as Douglas continues to explore and push his craft; living by the motto “just keep making great work.” He has two major ongoing projects that are both big, bold, long term, and ambitious. He has so far completed 7 “The RULES” pieces with 10 more to make. These are based on balance, colour, chakras, and truth. They demand the highest quality canvas and paint. He also has an ongoing series, Portraits of Poets. These reflect his passionate relationship with the vibrant Bristol poetry scene. 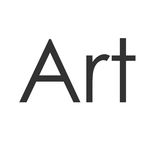