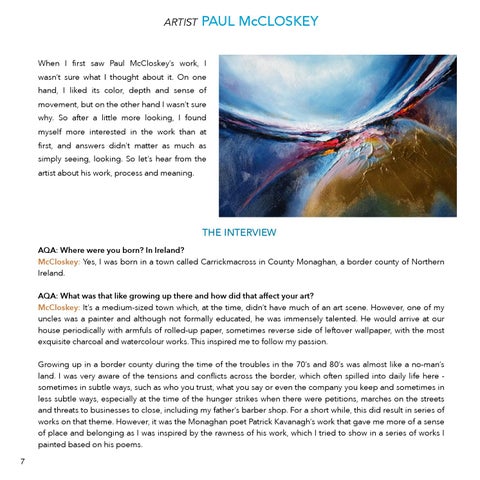 When I first saw Paul McCloskey’s work, I wasn’t sure what I thought about it. On one hand, I liked its color, depth and sense of movement, but on the other hand I wasn’t sure why. So after a little more looking, I found myself more interested in the work than at first, and answers didn’t matter as much as simply seeing, looking. So let’s hear from the artist about his work, process and meaning.

THE INTERVIEW AQA: Where were you born? In Ireland? McCloskey: Yes, I was born in a town called Carrickmacross in County Monaghan, a border county of Northern Ireland. AQA: What was that like growing up there and how did that affect your art? McCloskey: It’s a medium-sized town which, at the time, didn’t have much of an art scene. However, one of my uncles was a painter and although not formally educated, he was immensely talented. He would arrive at our house periodically with armfuls of rolled-up paper, sometimes reverse side of leftover wallpaper, with the most exquisite charcoal and watercolour works. This inspired me to follow my passion. Growing up in a border county during the time of the troubles in the 70’s and 80’s was almost like a no-man’s land. I was very aware of the tensions and conflicts across the border, which often spilled into daily life here sometimes in subtle ways, such as who you trust, what you say or even the company you keep and sometimes in less subtle ways, especially at the time of the hunger strikes when there were petitions, marches on the streets and threats to businesses to close, including my father’s barber shop. For a short while, this did result in series of works on that theme. However, it was the Monaghan poet Patrick Kavanagh’s work that gave me more of a sense of place and belonging as I was inspired by the rawness of his work, which I tried to show in a series of works I painted based on his poems. 7