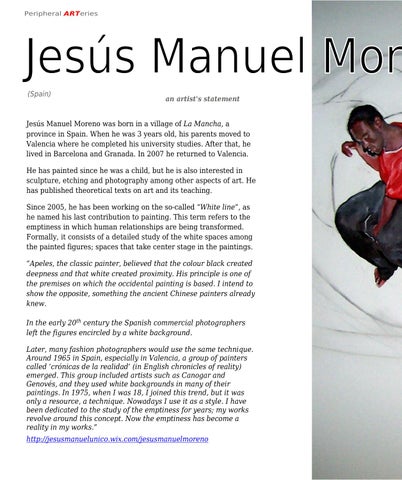 Jesús Manuel Moreno was born in a village of La Mancha, a province in Spain. When he was 3 years old, his parents moved to Valencia where he completed his university studies. After that, he lived in Barcelona and Granada. In 2007 he returned to Valencia. He has painted since he was a child, but he is also interested in sculpture, etching and photography among other aspects of art. He has published theoretical texts on art and its teaching. Since 2005, he has been working on the so-called “White line”, as he named his last contribution to painting. This term refers to the emptiness in which human relationships are being transformed. Formally, it consists of a detailed study of the white spaces among the painted figures; spaces that take center stage in the paintings. “Apeles, the classic painter, believed that the colour black created deepness and that white created proximity. His principle is one of the premises on which the occidental painting is based. I intend to show the opposite, something the ancient Chinese painters already knew. In the early 20th century the Spanish commercial photographers left the figures encircled by a white background. Later, many fashion photographers would use the same technique. Around 1965 in Spain, especially in Valencia, a group of painters called ‘crónicas de la realidad’ (in English chronicles of reality) emerged. This group included artists such as Canogar and Genovés, and they used white backgrounds in many of their paintings. In 1975, when I was 18, I joined this trend, but it was only a resource, a technique. Nowadays I use it as a style. I have been dedicated to the study of the emptiness for years; my works revolve around this concept. Now the emptiness has become a reality in my works.” http://jesusmanuelunico.wix.com/jesusmanuelmoreno

submit your artworks to: peripheral_arteries@dr.com 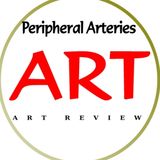