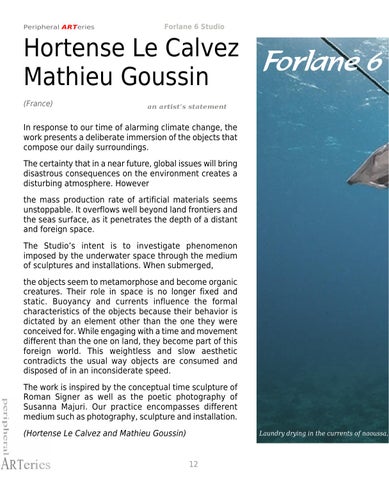 In response to our time of alarming climate change, the work presents a deliberate immersion of the objects that compose our daily surroundings. The certainty that in a near future, global issues will bring disastrous consequences on the environment creates a disturbing atmosphere. However the mass production rate of artificial materials seems unstoppable. It overflows well beyond land frontiers and the seas surface, as it penetrates the depth of a distant and foreign space. The Studioâ&#x20AC;&#x2122;s intent is to investigate phenomenon imposed by the underwater space through the medium of sculptures and installations. When submerged, the objects seem to metamorphose and become organic creatures. Their role in space is no longer fixed and static. Buoyancy and currents influence the formal characteristics of the objects because their behavior is dictated by an element other than the one they were conceived for. While engaging with a time and movement different than the one on land, they become part of this foreign world. This weightless and slow aesthetic contradicts the usual way objects are consumed and disposed of in an inconsiderate speed. The work is inspired by the conceptual time sculpture of Roman Signer as well as the poetic photography of Susanna Majuri. Our practice encompasses different medium such as photography, sculpture and installation. (Hortense Le Calvez and Mathieu Goussin)

Laundry drying in the currents of naoussa,