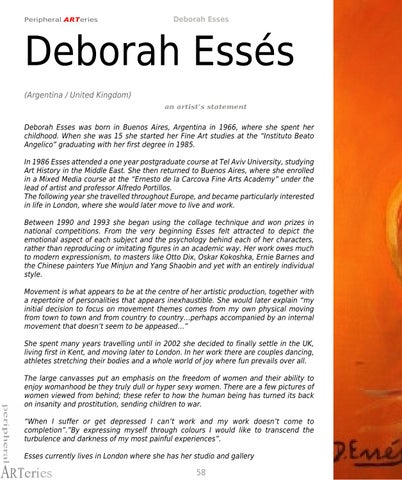 Deborah Esses was born in Buenos Aires, Argentina in 1966, where she spent her childhood. When she was 15 she started her Fine Art studies at the “Instituto Beato Angelico” graduating with her first degree in 1985. In 1986 Esses attended a one year postgraduate course at Tel Aviv University, studying Art History in the Middle East. She then returned to Buenos Aires, where she enrolled in a Mixed Media course at the “Ernesto de la Carcova Fine Arts Academy” under the lead of artist and professor Alfredo Portillos. The following year she travelled throughout Europe, and became particularly interested in life in London, where she would later move to live and work. Between 1990 and 1993 she began using the collage technique and won prizes in national competitions. From the very beginning Esses felt attracted to depict the emotional aspect of each subject and the psychology behind each of her characters, rather than reproducing or imitating figures in an academic way. Her work owes much to modern expressionism, to masters like Otto Dix, Oskar Kokoshka, Ernie Barnes and the Chinese painters Yue Minjun and Yang Shaobin and yet with an entirely individual style. Movement is what appears to be at the centre of her artistic production, together with a repertoire of personalities that appears inexhaustible. She would later explain “my initial decision to focus on movement themes comes from my own physical moving from town to town and from country to country…perhaps accompanied by an internal movement that doesn’t seem to be appeased…” She spent many years travelling until in 2002 she decided to finally settle in the UK, living first in Kent, and moving later to London. In her work there are couples dancing, athletes stretching their bodies and a whole world of joy where fun prevails over all. The large canvasses put an emphasis on the freedom of women and their ability to enjoy womanhood be they truly dull or hyper sexy women. There are a few pictures of women viewed from behind; these refer to how the human being has turned its back on insanity and prostitution, sending children to war. “When I suffer or get depressed I can’t work and my work doesn’t come to completion”.”By expressing myself through colours I would like to transcend the turbulence and darkness of my most painful experiences”. Esses currently lives in London where she has her studio and gallery