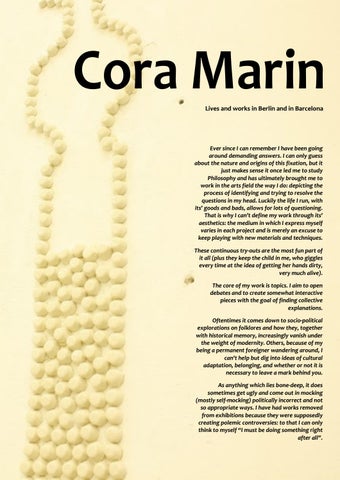 Cora Marin Lives and works in Berlin and in Barcelona

Ever since I can remember I have been going around demanding answers. I can only guess about the nature and origins of this fixation, but it just makes sense it once led me to study Philosophy and has ultimately brought me to work in the arts field the way I do: depicting the process of identifying and trying to resolve the questions in my head. Luckily the life I run, with its’ goods and bads, allows for lots of questioning. That is why I can’t define my work through its’ aesthetics: the medium in which I express myself varies in each project and is merely an excuse to keep playing with new materials and techniques. These continuous try-outs are the most fun part of it all (plus they keep the child in me, who giggles every time at the idea of getting her hands dirty, very much alive). The core of my work is topics. I aim to open debates and to create somewhat interactive pieces with the goal of finding collective explanations. Oftentimes it comes down to socio-political explorations on folklores and how they, together with historical memory, increasingly vanish under the weight of modernity. Others, because of my being a permanent foreigner wandering around, I can’t help but dig into ideas of cultural adaptation, belonging, and whether or not it is necessary to leave a mark behind you. As anything which lies bone-deep, it does sometimes get ugly and come out in mocking (mostly self-mocking) politically incorrect and not so appropriate ways. I have had works removed from exhibitions because they were supposedly creating polemic controversies: to that I can only think to myself “I must be doing something right after all”.