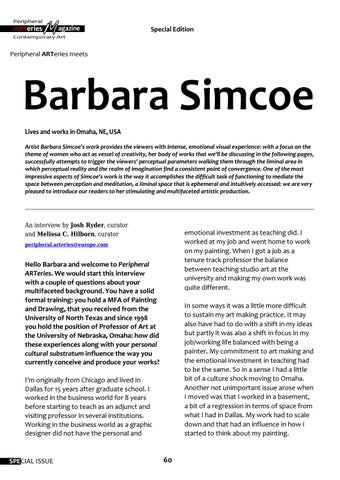 Barbara Simcoe Lives and works in Omaha, NE, USA Artist Barbara Simcoe's work provides the viewers with intense, emotional visual experience: with a focus on the theme of women who act as vessel of creativity, her body of works that we'll be discussing in the following pages, successfully attempts to trigger the viewers' perceptual parameters walking them through the liminal area in which perceptual reality and the realm of imagination find a consistent point of convergence. One of the most impressive aspects of Simcoe's work is the way it accomplishes the difficult task of functioning to mediate the space between perception and meditation, a liminal space that is ephemeral and intuitively accessed: we are very pleased to introduce our readers to her stimulating and multifaceted artistic production.

emotional investment as teaching did. I worked at my job and went home to work on my painting. When I got a job as a tenure track professor the balance between teaching studio art at the university and making my own work was quite different.

Hello Barbara and welcome to Peripheral ARTeries. We would start this interview with a couple of questions about your multifaceted background. You have a solid formal training: you hold a MFA of Painting and Drawing, that you received from the University of North Texas and since 1998 you hold the position of Professor of Art at the University of Nebraska, Omaha: how did these experiences along with your personal cultural substratum influence the way you currently conceive and produce your works?

In some ways it was a little more difficult to sustain my art making practice. It may also have had to do with a shift in my ideas but partly it was also a shift in focus in my job/working life balanced with being a painter. My commitment to art making and the emotional investment in teaching had to be the same. So in a sense I had a little bit of a culture shock moving to Omaha. Another not unimportant issue arose when I moved was that I worked in a basement, a bit of a regression in terms of space from what I had in Dallas. My work had to scale down and that had an influence in how I started to think about my painting.

Iâ&#x20AC;&#x2122;m originally from Chicago and lived in Dallas for 15 years after graduate school. I worked in the business world for 8 years before starting to teach as an adjunct and visiting professor in several institutions. Working in the business world as a graphic designer did not have the personal and