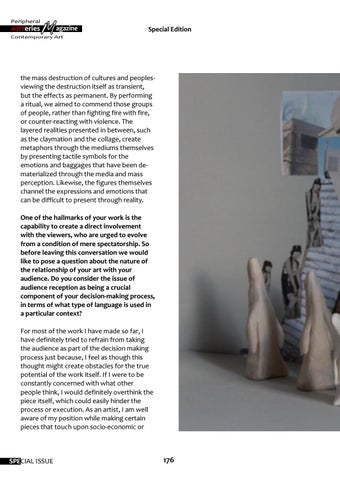 the mass destruction of cultures and peoplesviewing the destruction itself as transient, but the effects as permanent. By performing a ritual, we aimed to commend those groups of people, rather than fighting fire with fire, or counter-reacting with violence. The layered realities presented in between, such as the claymation and the collage, create metaphors through the mediums themselves by presenting tactile symbols for the emotions and baggages that have been dematerialized through the media and mass perception. Likewise, the figures themselves channel the expressions and emotions that can be difficult to present through reality. One of the hallmarks of your work is the capability to create a direct involvement with the viewers, who are urged to evolve from a condition of mere spectatorship. So before leaving this conversation we would like to pose a question about the nature of the relationship of your art with your audience. Do you consider the issue of audience reception as being a crucial component of your decision-making process, in terms of what type of language is used in a particular context? For most of the work I have made so far, I have definitely tried to refrain from taking the audience as part of the decision making process just because, I feel as though this thought might create obstacles for the true potential of the work itself. If I were to be constantly concerned with what other people think, I would definitely overthink the piece itself, which could easily hinder the process or execution. As an artist, I am well aware of my position while making certain pieces that touch upon socio-economic or