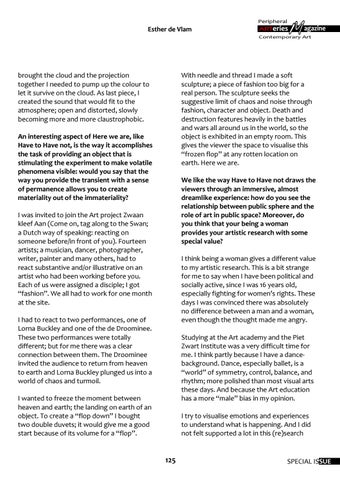 brought the cloud and the projection together I needed to pump up the colour to let it survive on the cloud. As last piece, I created the sound that would fit to the atmosphere; open and distorted, slowly becoming more and more claustrophobic.

With needle and thread I made a soft sculpture; a piece of fashion too big for a real person. The sculpture seeks the suggestive limit of chaos and noise through fashion, character and object. Death and destruction features heavily in the battles and wars all around us in the world, so the object is exhibited in an empty room. This gives the viewer the space to visualise this “frozen flop” at any rotten location on earth. Here we are.

An interesting aspect of Here we are, like Have to Have not, is the way it accomplishes the task of providing an object that is stimulating the experiment to make volatile phenomena visible: would you say that the way you provide the transient with a sense of permanence allows you to create materiality out of the immateriality?

We like the way Have to Have not draws the viewers through an immersive, almost dreamlike experience: how do you see the relationship between public sphere and the role of art in public space? Moreover, do you think that your being a woman provides your artistic research with some special value?

I was invited to join the Art project Zwaan kleef Aan (Come on, tag along to the Swan; a Dutch way of speaking: reacting on someone before/in front of you). Fourteen artists; a musician, dancer, photographer, writer, painter and many others, had to react substantive and/or illustrative on an artist who had been working before you. Each of us were assigned a disciple; I got “fashion”. We all had to work for one month at the site.

I think being a woman gives a different value to my artistic research. This is a bit strange for me to say when I have been political and socially active, since I was 16 years old, especially fighting for women’s rights. These days I was convinced there was absolutely no difference between a man and a woman, even though the thought made me angry.

Studying at the Art academy and the Piet Zwart Institute was a very difficult time for me. I think partly because I have a dancebackground. Dance, especially ballet, is a “world” of symmetry, control, balance, and rhythm; more polished than most visual arts these days. And because the Art education has a more “male” bias in my opinion.

I wanted to freeze the moment between heaven and earth; the landing on earth of an object. To create a “flop down” I bought two double duvets; it would give me a good start because of its volume for a “flop”.

I try to visualise emotions and experiences to understand what is happening. And I did not felt supported a lot in this (re)search