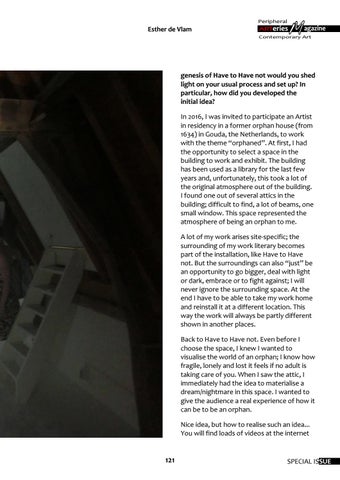 genesis of Have to Have not would you shed light on your usual process and set up? In particular, how did you developed the initial idea? In 2016, I was invited to participate an Artist in residency in a former orphan house (from 1634) in Gouda, the Netherlands, to work with the theme “orphaned”. At first, I had the opportunity to select a space in the building to work and exhibit. The building has been used as a library for the last few years and, unfortunately, this took a lot of the original atmosphere out of the building. I found one out of several attics in the building; difficult to find, a lot of beams, one small window. This space represented the atmosphere of being an orphan to me. A lot of my work arises site-specific; the surrounding of my work literary becomes part of the installation, like Have to Have not. But the surroundings can also “just” be an opportunity to go bigger, deal with light or dark, embrace or to fight against; I will never ignore the surrounding space. At the end I have to be able to take my work home and reinstall it at a different location. This way the work will always be partly different shown in another places. Back to Have to Have not. Even before I choose the space, I knew I wanted to visualise the world of an orphan; I know how fragile, lonely and lost it feels if no adult is taking care of you. When I saw the attic, I immediately had the idea to materialise a dream/nightmare in this space. I wanted to give the audience a real experience of how it can be to be an orphan. Nice idea, but how to realise such an idea... You will find loads of videos at the internet